How to Fish a Jerkbait Like a Pro: Everything You Need to Know

In clear water, there’s probably no lure as effective as a jerkbait.

That’s a strong claim, and we need to back it up.

Because jerkbaits mimic the movement of injured baitfish, when fished right, they trigger a primal reaction in bass. And as pros like Kevin VanDam will tell you, they’ll come farther to hit that jerkbait than they will with any other lure you might throw.

A good jerkbait is probably the most effective clear-water lure you can throw.

But that’s the trick - they need to be fished properly to deliver on that promise.

If you’ve got a jerkbait in your tackle box that’s just not delivering, its high time to reinvestigate how to fish it.

Want to know how the pros fish a jerkbait?

Whether you prefer Strike King’s KVD, Yo-Zuri’s 3DB, Rapala’s X-Rap, or one of any number of other excellent jerkbaits out there, they all have a few design elements in common that separate them from crankbaits. 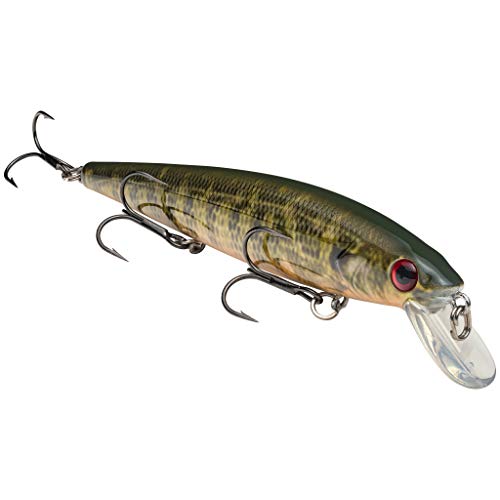 Strike King’s KVD is a winner.

A jerkbait will typically have the lip you’d expect, causing it to dive. But in combination with its body shape and a carefully engineered channel filled with just the right amount of tiny metal balls, jerkbaits are designed to run through erratic, darting turns.

They may wiggle like a crank if you crank them, but that’s not at all what they’re designed for.

They’ll also offer a bit of a kick at the end.

What I mean by that is they don’t just die on the end of your pull. Instead, they typically rise or fall a bit, mimicking the trouble baitfish have when they’re in deep trouble.

In colder water, typically pre-spawn, fish are a little slower on the strike, and that tiny, slow-falling action really turns on bites. By contrast, a gentle rise on the pause is perfect for spawn and post-spawn, when active bass will simply nail bait fish with a damaged swimbladder.

Jerkbaits are also very castable due to a combination of their weight and shape, and most have a wind-bucking, streamlined body, too. That makes them ideal for spooky fish and stand-off situations, further helping you take advantage of clear water by keeping your distance.

How to Fish a Jerkbait

There are a few hard and fast rules to fishing jerkbaits:

Begin by casting your jerkbait.

With a touch of slack in your line, rip your line tip in a short arc downward. That’ll jerk your jerkbait. But a well-designed lure won’t just plow forward; instead, it’ll drat erratically to both sides as it moves.

This little Yo-Z uri has a big presence in the water.

Then, leaving slack in your line, let it rest for a few seconds.

Your jerkbait isn’t done with its tricks, and now, it’ll rise or fall, attracting further attention.

Now, one trick to the jerkbait is that, with practice, you can work it over the same area, only bringing it back to the boat when you want to cast to somewhere new. That’s because you can learn to turn jerkbaits back on themselves, sending them in search patterns just a few feet wide.

That lets you keep your lure in the action zone longer, which is always a good thing.

I started this article with a strong claim - that a good jerkbait is the most effective clear-water lure you can throw.

Consider that jerkbaits offer simply unbeatable action when fished properly, that they’re easy to cast long distances, and that they really do summon bass from greater distances than any other design, and you can see why I’d stand by that praise.

So if you’ve got an unloved jerkbait in your tackle box, give it another try.

I’ll bet it’ll turn into a winner right away.

About The Author
Pete D
Born and raised in Cleveland, Ohio, Pete grew up fishing on the Great Lakes. When he’s not out on the water, you can find him reading his favorite books, and spending time with his family.
Comments
Subscribe
2 Comments
Newest
Oldest Most Voted
Inline Feedbacks
View all comments
Robin J Salsman

Do you fish a floating jerk bait the same way you do a suspended one?

Hey Robin, great question! You should fish a jerkbait the same way, whatever the depth it runs and irrespective of whether it floats, sinks, or is neutrally buoyant on the pause.