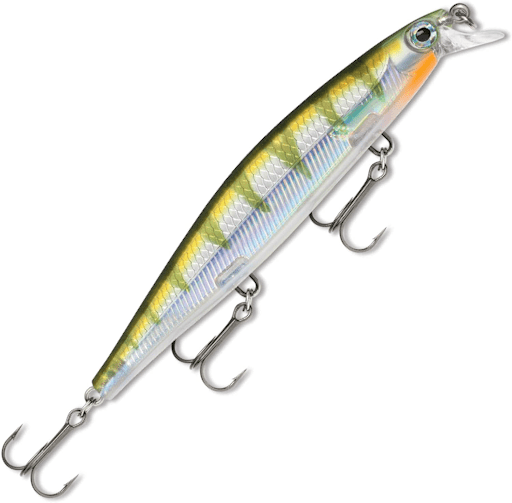 No one knows stickbaits better than Rapala, and 140 years of met limits and filled coolers just goes to prove that.

But the good folks at Rapala aren’t the kind to rest on their laurels. After all, constant innovation is the keystone of their success.

Careful design and lots of time on the water led to the development of the Shadow Rap in 2014, and since then, it’s proven itself as perhaps the deadliest jerkbait ever to make its way into the hands of anglers.

These two bodies can be had with the standard jerkbait lip or a longer version that dives deep.

The specs for these lures from Rapala reveal that the two body styles differ in size, weight, hook placement, and depth:

Each is offered in a wide range of excellent colors and patterns, with the standard Shadow Rap and Shadow Rap Shad Deep sporting no less than 14 options.

Obviously, the standard Shadow Rap is longer and heavier, and it’s also equipped with a third #6 treble. But just as obviously, the lighter Shad bodies dive a touch deeper.

Both cast well, though the more slender Shadow Rap is the clear winner when the wind is gusting.

Which is right for you largely depends on the water temperature: cooler temps favor the Shadow Rap Shad, while warmer water - and more active fish - tend to prefer the standard Shadow Rap.

As always, you want to match the hatch in clearer water but go brighter as visibility declines.

My top picks for clear water include colors like “Carbon,” “Yellow Perch,” and “Albino Shiner.” 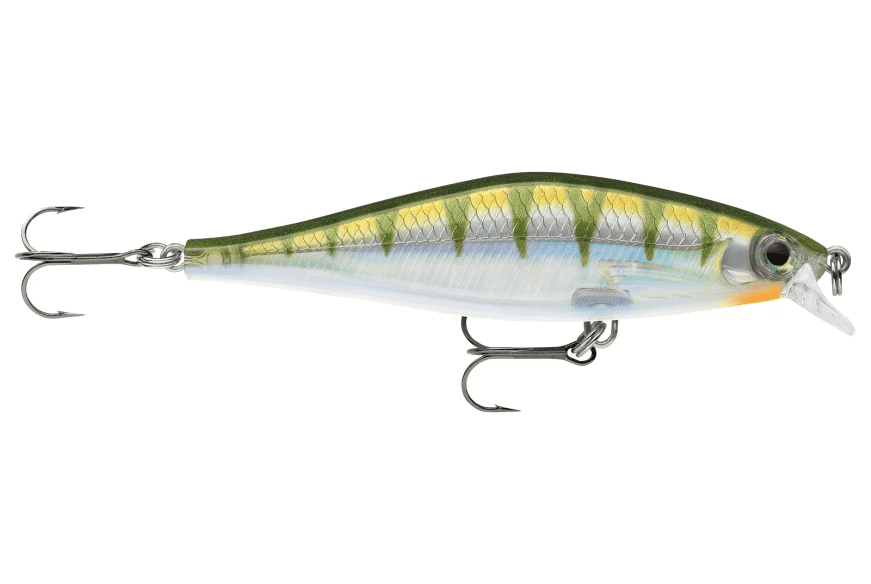 Yellow Perch is a hit where the water is clear and immature perch are a common prey item. 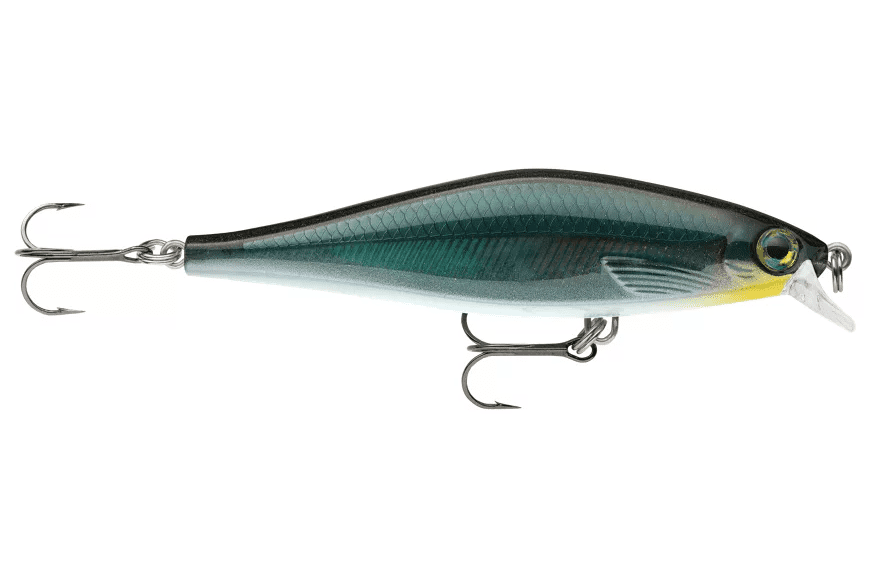 In the South, where bluegill are plentiful, Carbon can be an excellent option. 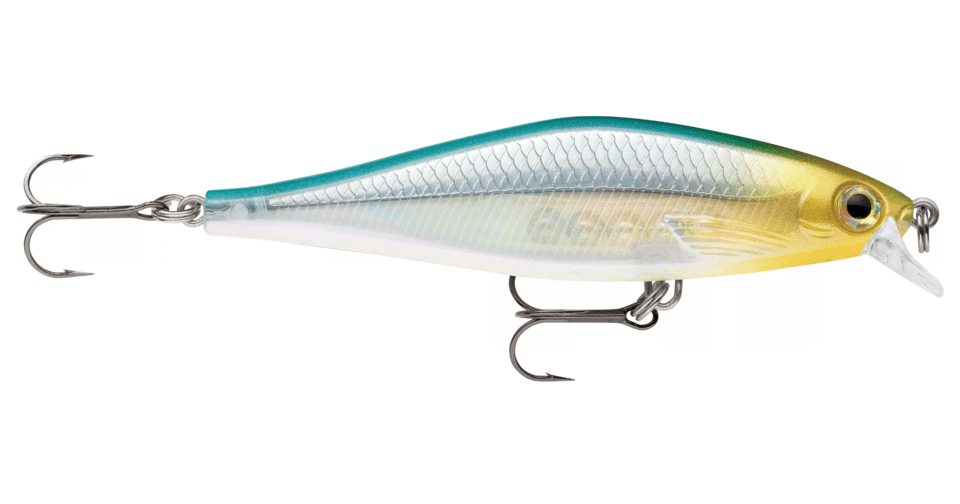 Blue Black Herring works well for me in both clear and murky water. 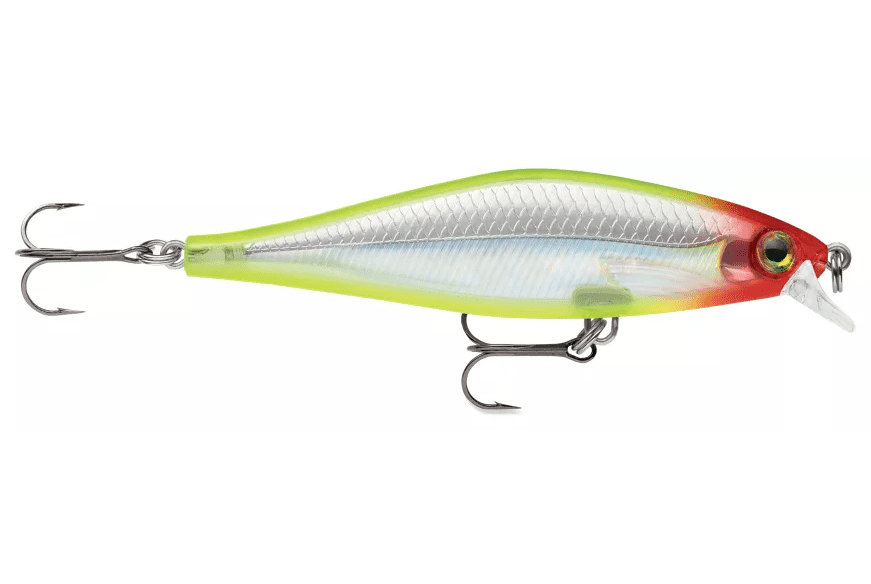 Clown is hard to beat when visibility is low.

Anyone can make a jerkbait of that size and weight, and if that’s all Rapala had up its sleeve, no one would be talking about the Shadow Rap.

But serious fishermen are, and you can chalk that up to some serious Rapala magic.

Unlike typical jerkbaits that shimmy on the pull and then glide to a stop, the Shadow Rap turns sharply as it’s jerked, making a series of right and left turns that send its nose across roughly 180 degrees.

That wild gyration sends vibrations and sound to hungry fish, and there’s just no question that it alerts them to the presence of an injured baitfish. It also keeps the Shadow Rap confined to a tighter area, allowing you to work high-probability strike zones for longer.

No more cast and cast again. Instead, you can work this jerkbait till you get a strike.

And Rapala has pretty much eliminated self-snagging: those erratic turns don’t result in hooked lines.

Five tungsten balls in a small channel both orient this lure and impart that action - in conjunction with both the body and lip shape, of course.

And rather than just petering out at the end, the Shadow Rap adds an extra trick.

That’s a trick that lures fish into a strike, mimicking the dying motions of injured prey.

Most anglers prefer that falling motion in cooler water when fish are more lethargic. By contrast, that rise on the pause is perfect for warmer water, when active predators will simply nail bait fish with a damaged swimbladder.

I know, I know: jerkbaits are traditionally fall and pre-spawn lures. But I’m telling you these Shadow Raps are deadly post-spawn and in high summer, too.

That combination of enticing action, excellent body shape, and perfect color makes them as close to an all-season lure as you’ll find.

Rapala’s Shadow Rap: How to Fish This Jerkbait

Jerkbaits work a bit differently than crankbaits, even though they look a lot alike.

Crankbaits are retrieved, often with a varied cadence, and you’re looking to run them into obstacles to create erratic motions.

By contrast, jerkbaits like the Rapala Shadow Rap aren’t going to be steadily retrieved.

Begin by casting your Shadow Rap, let it hit the water, get your line tight, and wait. Just let it be for a few seconds.

Sometimes, a hungry fish will take it right then.

If not, twitch your rap tip a few times to set the Shadow Rap writhing - but be careful: you don’t want to keep a tight line during this motion. Instead, you’re looking for just a touch of slack to allow the Shadow Rap to make those tight turns and fluttering rises and falls.

Create this by moving your rod tip back to its original position, pointing back at the bait.

Then pause again, giving this lure at least a few seconds. In colder water, stretch this pause out to something like a five-count.

Check that your line is tight again, then restart the rod twitches that set it dancing, allow slack to develop, and pause.

With practice, you’ll get this cadence down in no time.

John B
If it has fins, John has probably tried to catch it from a kayak. A native of Louisiana, he now lives in Sarajevo, where he's adjusting to life in the mountains. From the rivers of Bosnia to the coast of Croatia, you can find him fishing when he's not camping, hiking, or hunting.
Comments
0 0 votes
Article Rating
Subscribe
0 Comments
Inline Feedbacks
View all comments