How to Tie the (Triple) Surgeon’s Knot

Initially developed to hold the two sides of a suture closed while the surgeon completed the stitch, the Surgeon’s Knot quickly gained popularity among anglers. Very easy to tie even with cold, wet hands, the Surgeon’s knot is ideal for joining lines of different diameters and/or materials.

Often tied with two twists, the addition of a third will dramatically increase this knot’s integrity in all line types.

How to Tie the (Triple) Surgeon’s Knot 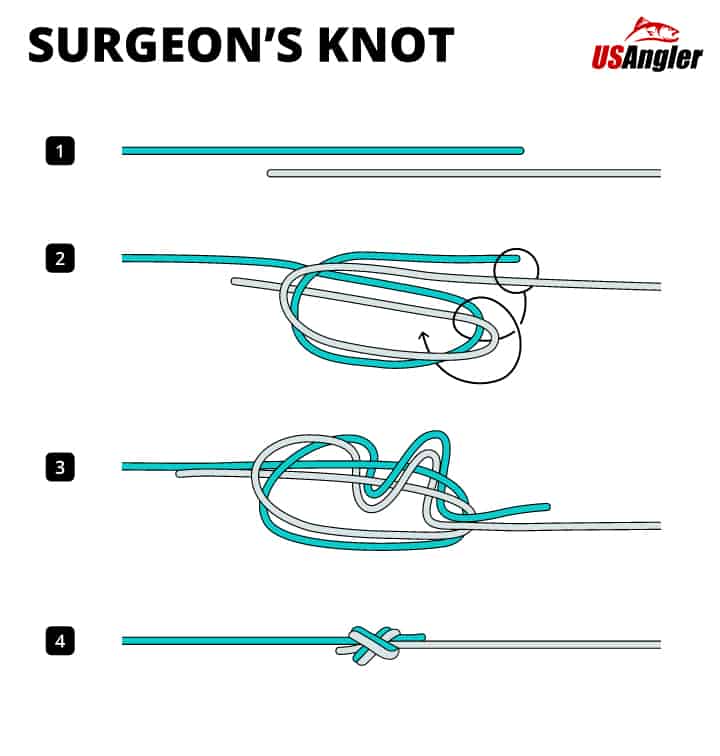 Why Rely on the Surgeon’s Knot?

What’s Not to Love About the Surgeon’s Knot?

The Surgeon’s Knot has been with us for a while, and it’s won a devoted following for its strength, ease, and speed. There are other knots that can join dissimilar diameter lines, but none that are faster or easier to tie in the real world.

But it does have some issues.

Perhaps the most important potential problem is that, according to experts like Brant Oswald, a fly guide and instructor, “If one strand cuts across the other as the knot rolls over into the figure 8 as it is tightened, the knot will be quite weak, and it is not due to any error on the part of the angler tying the knot.”

For that reason, you should always test your Surgeon’s Knot before using it.

The second issue is that while you’ll often hear it advertised as a “100% knot,” that’s only true under two conditions. First, that it doesn’t cut across itself during cinching, and second, that it’s used to join very similar line diameters.

But the Surgeon’s Knot and its many extra turns are nowhere near 100% when the lines vary in size. Indeed, careful testing by Field & Stream revealed that, when tying 10-pound Seaguar InvizX fluorocarbon to 10-pound Trilene Big Game monofilament with a Triple Surgeon’s knot, integrity was compromised at around 6 pounds or 65% of the line’s rated test strength.

When the Surgeon’s knot is applied to a fluoro-to-braid connection--say 10-pound InvizX fluorocarbon and 30-pound FireLine Braid--knot integrity (Quadruple Surgeon) failed at 80%.

That’s a darn good number given the materials involved!

Ultimately, however, there can be stronger knots for joining lines of dissimilar size: the J Knot or the Palomar to swivel to Palomar - but there are none faster or easier to tie.

Whether you choose the Surgeon’s knot or not is up to you and how important speed and ease are when you need to make a decision.

The Surgeon’s Knot in Braid and Fluorocarbon

Nylon monofilament has what engineers call a high coefficient of friction, meaning that it likes to grip and bite against itself. That makes it relatively easy for knots to hold in this material, and as you’d expect, the Surgeon’s Knot holds well in mono, especially when the lines are of similar diameter.

Fluorocarbon is much like mono in terms of its friction against itself, and it really likes to bite. But rarely, if ever, will you need to join fluoro to fluoro; it’s far more likely that you’ll be using a fluorocarbon leader on braid or mono and that these will be of vastly different diameters.

And that’s where the Surgeon’s Knot shines!

Despite the fact that braid is as slick as a seasoned politician at a fundraiser, adding loops to the Surgeon’s Knot--up to four--will improve its ability to hold. Mono and fluoro to braid connections can be very strong with a well-tied Quadruple Surgeon, and I recommend making the extra two loops with any superline.

When Do Surgeon’s Knots Fail?

The Surgeon Knot, especially with three or four turns, is very strong and reliable, but it can fail. The most likely culprits are: