With legions of devoted fans and plenty of advertising hype, we ask the question on your mind: does the Shimano Curado K really live up to its reputation?

The simple answer is yes.

The Shimano Curado K is probably the best reel at its price point, and it may just be the best reel you can buy. It’s that good. Indeed, Shimano’s reputation among reel manufacturers is something its competition can only envy, and if there’s a single brand that you can trust when buying reels, it’s definitely the big S.

The Curado series has been popular with anglers for years, and recent changes to the line-up have done nothing but improve it. Now packed with features that used to be available only on their pricier models, the Curado K is a step-up from the Curado I of old--and that’s really saying something. For some anglers, it even rivals the impressive (and expensive) Chronarch series. 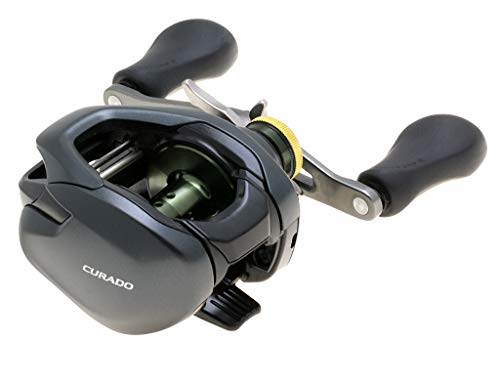 MicroModule gearing was previously available only on flagship models costing quite a bit more than the Curado K, but Shimano decided to include this premium option in the much more affordable Curado series.

By moving to very small teeth in the solid-brass gearing, this system provides a much slicker, smoother feel. It’s just a guess, but I’d bet this improves durability as well, and it’s certainly more durable than similar gearing made from aluminum.

The SVS Infinity braking system is a centrifugal design that relies on friction to prevent bird’s nests when you change lure weights, cast into the wind, or throw tiny jigs, spinners, or crankbaits.

Adjustable via an external know, the system itself can also be accessed via the hinged side-plate, allowing very precise settings. Simply by raising or lowering one of four brake heads, you can fine-tune the knob’s setting, allowing a virtually infinite range of settings.

To say that it works well is something of an understatement, and once you get it dialed in for your needs, you can pretty much say goodbye to line problems.

Shimano says that the Curado K is a full 10 percent smaller than the Curado I it replaces. I haven’t measured, but that seems about right. That size reduction translates into a more palmable body that fits my hand extremely well.

As the Curado’s body has shrunk, its handle has grown. Not every angler likes a big handle, but if you do, this is welcome news!

With longer arms, I feel that cranking power has improved, and given the excellent range of gear ratios available on this reel, that’s nothing to sneeze at.

Of course, this reel can be had in both left- and right-hand configurations.

Rigidity and durability are promises the Curado K can keep with a solid aluminum frame. All that strength comes at a cost, however, and even with this lightweight material, the lightest of the line-up weighs in at a portly 7.6 ounces.

I’d chalk that up to the MicroModule gearing--it probably adds a fraction of an ounce or two in return for finer feel.

To access and maintain the SVS Infinity braking system, you simply open a side-plate that pivots on a fixed pin. As simple as that sounds, that retaining pin is a godsend.

If you’ve ever had a side-plate drop into the water, you know that a great day of fishing can be spoiled in an instant. With this new design, that simply can’t happen.

In concert with the MicroModule gearing and the Hagane body, the Curado K’s S3D Stable Spool system cuts down on vibration. If you’re looking for buttery-smooth, awesome slickness, look no further!

This leads to some very, very long casts. With the SVS Infinity system dialed-in for your lure weight and conditions, I think this is an unbeatable reel for long-distance casting.

As you’d expect, the Curado K sports a carbon fiber drag, providing smooth, positive resistance from just ounces to its full 11-pound setting. While not as powerful as the drag on the Curado I, I really can’t find fault with this system.

The Shimano Curado K is a decided improvement on the already excellent Curado I of old. Quite simply, it’s a top-notch reel that costs about $100 less than the incredible Chronarch, while still delivering buttery-smooth gearing, awesome braking, and amazing casting. Devoted Chronarch fans may not agree, but I’m not sure I’d spend the extra money!

Casting performance is class-leading once you’ve adjusted the SVS Infinity system to your needs. I can’t think of a reel that beats this one in my hands, though your mileage may vary. The drag on the Curado K is admirably strong, preventing slippage and skipping even at light settings. And with three choices of gear ratio, you can match the Curado K to your needs, whether that’s crankbaits, soft plastics, jigs, frogs, or anything else.

So where does the Curado K not meet expectations?

If there’s a problem with this reel, it’s weight. The addition of solid brass gearing, despite carving a few millimeters of body down to reduce size, had added a bit of mass. Definitely not a lightweight, if a few extra ounces bother you, you might want to look elsewhere.

For some anglers, 11 pounds of drag may not be enough, especially if you’re pushing the Curado K into salt or brackish water for reds. That’s a personal call, and I can’t really count that as a demerit.

The Shimano Curado K has earned the hype attending its release. It’s an incredible reel that delivers top-notch quality, bomb-proof durability, and a refinement that--to many anglers--rivals the Chronarch series.

That it does so at its price-point is amazing, and if you haven’t tried the Curado K, you don’t know what you’re missing!