Rock Bass vs. Smallmouth Bass: A Guide to Easy Identification

When it comes to both recreational and professional angling, there’s no doubt that bass are the most popular species to catch. While it can be up for debate as to which bass is the most sought after, smallmouth bass rank high on that list.

If you’ve targeted smallmouth bass, then there’s a good chance you have also come across rock bass and maybe had a tough time distinguishing the two. Yes, the two can seem similar, but there are some distinct differences. Below, we’ll check out their similarities and differences so that you can easily identify the two the next time you’re on the water. 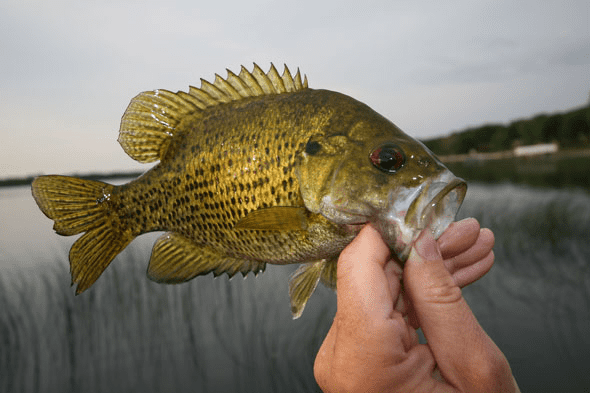 Rock bass, scientifically known as Ambloplites rupestris, aren’t actually in the bass family at all, but instead are a species of sunfish. Depending on where in their natural distribution you find them, you’ll often hear them referred to as ‘red-eye,’ ‘rock perch,’ or ‘black perch’ - all nicknames that are suggestive of their panfish heritage.

Native to the North Eastern US and South Eastern Canada, rock bass can be found naturally throughout, but their range doesn’t stop there, having been introduced to lakes and reservoirs across North America. Their ability to adapt to either cold or warm bodies of water and their liking of rocky areas, as well as areas high in vegetation, means that they’ve been able to flourish in many bodies of water from coast to coast.

As with smallmouth bass, rock bass prefer clear, rocky bodies of water. Clear running streams and rivers, or lakes with rocky shorelines, are ideal areas to find rock bass. If those shorelines happen to have some vegetation growth, there are sure to be rock bass waiting to ambush whatever comes their way.

With a diet of aquatic insects, smaller fish, and crayfish, it’s not surprising that anglers out for smallmouth will also run into numbers of rock bass.

At first glance, it may be easy to confuse rock bass with a juvenile smallmouth bass Because they share much of the same habitat and diet, the coloring of the two can often be very similar. But a closer look quickly reveals some very distinct differences.

Typically rock bass will have a goldish green color that can be either darker or lighter depending on the water they are living in (slightly more stained water will result in a darker hue). Those goldish green sides contain dark spots that run horizontally from gill plate to tail in a regular pattern. 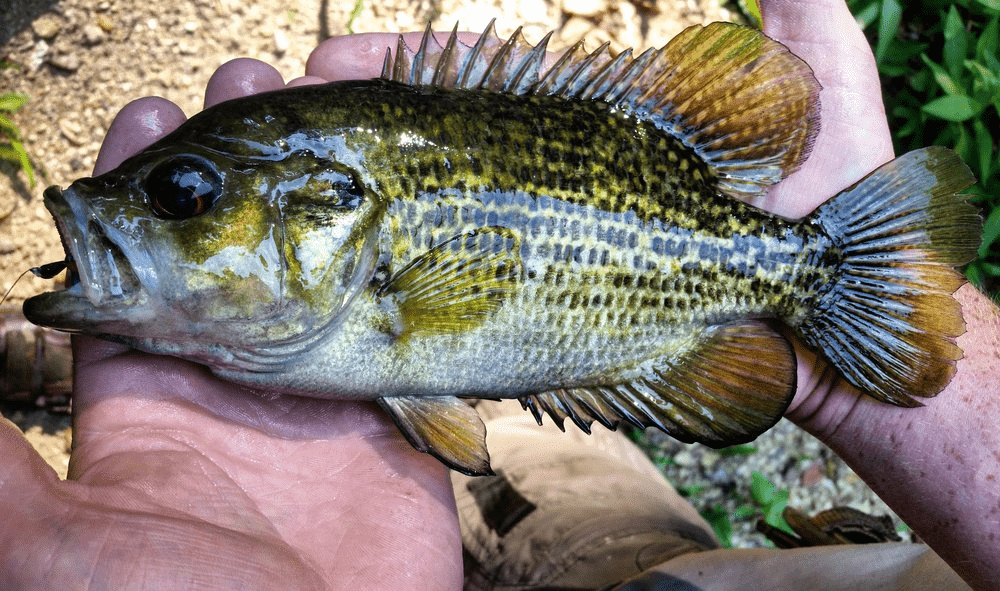 Being a panfish, mature rock bass are relatively small and will average 6 to 8 inches in length and weigh about a half pound. That doesn’t mean they can’t grow bigger and fish in the two-pound range have been recorded, with the world record weighing in at a whopping 3 pounds! 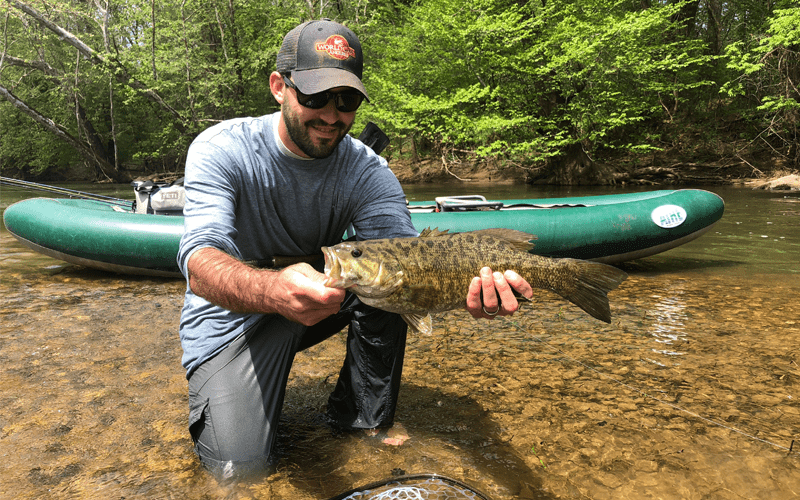 Smallmouth Bass, or Micropterus dolomieu, join their Largemouth cousins in the black bass family. While not as big as their warm water counterparts, mature fish are much larger than the rock bass that share the same water. The average size of a smallmouth will range from 10 to 20 inches or 1 to 6 pounds, with many catches recorded in the 27-inch or 8- to 9-pound range, and fish in the 10- to 12- pound range becoming more common.

Like rock bass, smallmouth bass love clear bodies of water with a rocky or sandy bottom. Where their preference differs is that smallmouth are more likely to be hanging around areas with little to no vegetation; however, it is common on many lakes for these two areas to overlap. Smallmouth also love areas with current, using it to ambush prey in pools and eddies, making clear running streams and rivers ideal places to find aggressive fish.

With Smallmouth being native to the St. Lawrence River Basin and the Great Lakes, they are very prominent in the North Eastern US as well as Southeastern Canada. Smallmouth have also been introduced into many lakes, rivers, and reservoirs where they are not native, and can now be found all across North America. Most bodies of water where smallmouth bass are native can support healthy populations. But their aggressive feeding behavior and high reproduction rate can, at times, be detrimental to areas where they have been introduced, negatively affecting other species as they compete for food with fish that they normally would not have to compete with.

A smallmouth bass’ diet can be very similar to that of a rock bass, with a couple of differences. Smallmouth will also eat amphibians and are known to be cannibalistic, consuming the young of other smallmouth bass.

A smallmouth bass will typically feature a goldish-green to olive hue, but it is not unheard of for them to be a dark brown or even black, with their backs a deep bronze color (hence the nickname bronzeback). While they do often also have spots or stripes that run vertically on their thick bodies, this can be the exception and not the rule.

Smallmouth are aggressive predators and their muscular, streamlined body shape shows it. Despite the fact that many refer to bigger smallmouth as ‘footballs,’ they tend to be longer and thinner than many of their counterparts, including rock bass.

The two key features you should focus on when comparing two similar-sized fish should be body shape and coloration. A rock bass will have a shorter, more stout body shape, while a smallmouth will be more muscular and streamlined. Yes, both fish can often have a similar golden-brown skin tone. Rock bass will have dark spots that run horizontally, whereas smallmouth often feature spots or stripes that run vertically.

Proper identification is essential for any angler, not only for peace of mind but also to ensure that you are fishing within the rules and regulations of your area.

While it can sometimes be tough to distinguish a smallmouth bass from a rock bass, we hope that this article helped you understand how to differentiate between the two!

And as always, we’d love to hear from you, so please leave a comment below.

Dan R
Dan was practically born with a fishing rod in his hand. Growing up in the Great Lakes Region fishing has been a major part of his life from a very young age. When not on the water you can find Dan enjoying time with his family.
Comments
Subscribe
0 Comments
Inline Feedbacks
View all comments