How To Catch Redfish - Our Best Redfish Fishing Tips

The first time I fished for reds I was hooked.

Standing in a small boat as the sun sank below the marshes, I could see their tails cutting the surface of the shallows. Armed with a bit of shrimp, I sent my rig right up amongst them. My hook was swallowed as it hit the water, and my slip float was rocketing sideways as the fish began to fight.

That’s my kind of fishing, and I’ve never forgotten the experience.

Whether you call them reds, red drum, channel bass, or anything else, the Sciaenops ocellatus is an amazing fish to chase and eat. As predictable as taxes, the better you understand redfish, the easier they are to catch.

We’d like to help you get up to speed on these beautiful, fun-to-catch fish, so keep reading! Below, you’ll find a basic guide to the species, as well as some of our best redfish tips.

Looking for some gear to target Redfish? Check out our guides:

Redfish Basics: What You Need to Know

Sciaenops ocellatus are a golden-red to copper-colored fish, reaching an average length of 28 to 33 inches by maturity at age 3 to 5. They get much larger as they age, and bull reds, as they’re affectionately known, can weigh-in at close to 100 pounds!

Common in the waters of the Gulf of Mexico and southern Atlantic, anglers from Virginia to Texas recognize these fish by their bright colored scales and the large, dark eyespot near their tail. 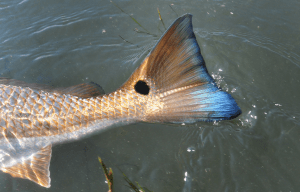 They get their common name, red drum, from the males’ use of their swim bladders to create a drumming sound to attract females during spawning. From August to September, redfish mate in shallow coastal waters, releasing millions of eggs per female.

Redfish have a varied diet that changes seasonally. In the warmer months, they feed on crab, mullet, and shrimp, while the winter finds them eating small fish like croaker, spot, and pinfish.

For reasons that are obvious, crabs, live shrimp, and minnows are popular live bait choices.

Redfish are voraciously predatory, and their down-turned mouths help them forage for food on the bottom. But they’re also prey themselves, and their fear of larger fish and marine mammals drives them to places in which structure and cover offer protection.

As a result, they’re often found around pilings, docks, rocks, marsh grass, and anything else that can allow them to hide from fast-swimming apex predators like dolphins. Immature reds prefer shallow marshes for just this reason, though I’ve caught my share of keepers there, too, sight-fishing in the shallows.

How To Catch Redfish: Our Best Redfish Fishing Tips

Vary Your Live Bait Choices With the Season

Reds change their diet to match the hatch and season, and savvy anglers are flexible in their choice of live bait.

Our Top Picks for the Best Bait and Lures for Redfish

When the weather’s warm and the shrimp are running, they make an excellent choice. Rigging shrimp on a hook is pretty simple, and the goal is to both secure the bait in place and keep it alive for as long as possible.

If you want a quick refresher on how to rig shrimp, check out this video:

Blue crab are also an excellent option, especially for larger reds. They’re easy to rig with just a minute or two of prep. Charlie Gray, an Alabama charter captain, is a big fan of crabs. "I prefer small blue crabs 3 to 5 inches across the shell and rig them on 3/0 to 7/0 circle hooks with 3 to 4 feet of 30- to 40-pound fluorocarbon leader. And I add a 2- to 4-ounce egg sinker above the swivel connecting the leader to the main line of 30- to 50-pound braid."

If you’re not sure how to rig a crab on a hook, this video offers an excellent guide:

In cooler weather, reds seek out minnows, which is good news since they’re easy to catch in a cast net! I typically prepare a few aerated buckets with local water, make a few tosses of a cast net under a bright light, and have plenty of bait for the weekend.

If you want to bone-up on rigging a minnow, take a look:

Finally, cut bait like mullet is almost always a solid choice. Much like the minnows, I like to catch mine so that I have live, fresh fish--meaning better flavor and scent for the reds!

Need a reminder for how to prepare and rig cut bait? Watch this video:

With all of these choices, I’d either run good, strong monofilament to my terminal tackle, or if I’m spooling on braid, end with 2 to 3 feet of strong fluorocarbon leader.

For mature reds, think 10-pound line with a 20-pound fluoro leader; for bulls, 30-pound braid with a 60-pound leader is about right. I’ve run mono for mature reds at strengths of 12 to 20 pounds and never had any trouble.

While some anglers like to run a standard “J-hook” on reds, I think the best choice is a high-quality circle hook. Circle hooks’ unusual shape means that they’ll usually snag themselves without the need for a hookset. Just tighten your line, and the hook should do the work for you.

When using shrimp or minnows, the goal is to keep the bait alive and kicking as long as you can. Thin wire hooks are always a good bet, and I like both the Owner's Mutu Light Circle Hook and the Gamakatsu Nautilus Light Circle Hook

Look for sizes ranging from 3/0 to 7/0, matching the hook to the size of red you’re after.

But keep this pro tip in mind: if you can’t easily snag the rigged hook with your hand, neither can the red!

From mangrove roots to pilings, reds congregate where they feel safe. That often means surprisingly shallow water where there’s plenty of grass for them to hide. As John Eggers, a charter captain in Florida, explains, “I look for open areas combined with submerged grass in water 2 to 3 feet deep. That’s where reds hold to ambush mullet and other bait.”

Captain John Gribb agrees. “Inshore redfish,” he says, “spend most of their time in water less than 2-feet deep and on the low tide flats they will almost always maraud in schools.”

That may seem strange if you’re used to hunting deep water for your fish, but reds move where their larger predators can’t use their superior speed to catch them. I usually fish salt marshes, and the reds will be clustered in very shallow water, usually in tall grass, in tiny coves that you wouldn’t think could hold fish of that size and number.

And a great way to know you’re on the fish is to look out for their tails cutting the surface. They’ll often cruise in water that shallow!

But if there’s one secret to catching more red drum, it’s fishing the tides.

Here, local knowledge is key, because you need to predict exactly how much of a difference the changing tide will create. Noted redfish pro Bryan Watts says that "The biggest distinction in tides for most tournament redfishermen is between the East Coast or Atlantic tides and Gulf Coast tides. Big 4- to 6-foot tides are the norm along the East Coast - Fernandina Beach, Fla., Jacksonville, Fla., and up through North Carolina. Over here on Florida's West Coast, we're dealing with mostly 2- to 4-foot tides." The bigger the tidal change, the more reds will be moving.

Indeed, if you’re fishing them really far inshore where tidal changes are minimal, they may not move much at all!

Low tide is prime time, and most serious red anglers look for pockets of shallow water holding schools. They know, as you should, too, that the water’s ebb concentrates them in pockets, where they’ll school and feed voraciously.

But low tide is not the only hot moment. Generally speaking, redfish love a moving tide, as it draws baitfish in and around the cover they hunt. “When half-tide rising water begins flooding grass banks, oyster banks and points, then baitfish, shrimp and crabs flee to these safe havens while redfish often stage nearby waiting for sufficient water depth to advance,” explains Gribb.

As the water rises, then, you know just where to look.

And the good news? According to pros like Ben Alderman, redfish travel predictable, repetitive routes throughout these tidal changes. "These reds travel the same exact routes to and from their low- and high-water haunts with such punctuality, it's amazing… I know exactly what time a group of reds is going to pass a certain point on the outgoing tide and exactly what time they'll come back on the high tide."

The trick is to know these local patterns, study reds’ movement, and then ambush them as they pass.

"The groups of fish use points as they migrate out of creeks on a falling tide," Alderman says, agreeing with Gribb. "When they are returning with the incoming tide, they hold up in pockets and indentations along the marsh grass line - anywhere that provides the quickest access into the grass is where they will pause until the water gets high enough to get in the grass."

Learn the reds’ pattern, and you’ll be pulling them in!

While live bait is a popular choice, soft plastics are definitely something you should consider adding to your redfish arsenal. In Louisiana, for instance, classics like paddle-tailed minnows are a staple, especially when you match colors to the hatch. Worked beneath a popping cork like the Cajun Thunder, or simply rigged weedless and run above grass and around cover, they can deliver strikes consistently.

I like the 4-inch Z-MAN DieZel MinnowZ in colors like “Motor Oil” when the shrimp are running. 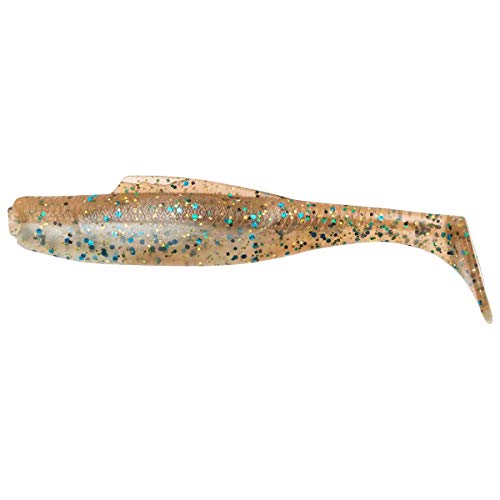 I hope these tips have helped you sharpen your skills for reds. Because whether you’re chasing tails in marshy shallows, working a shallow drop-off near weeds, or staking out a point as the tide changes, this is some of the most exciting fishing you’ll find inshore or off.