Muskie vs Pike: Identification of Scale, Tail, and Jaw

Muskie vs Pike: these not-so-gentle giants fire the imagination of anglers. Known for their sharp teeth, voracious appetites, and incredible power, these apex predators are enough to give you a second thought before you take a swim in a northern lake!

Close kin that share the genus Esox, E. lucius and E. masquinongy have a lot in common, including the ability to (rarely) breed across species. As long and sleek as a muscular torpedo, many anglers find it tough to tell them apart.

That’s not an academic distinction.

In many fisheries, like those in Iowa, pike can be taken at any size, but muskie must be 40 inches or larger to be harvested. Making a mistake not only endangers the muskie population but may also put you in trouble with the law!

In North America, pike grow to average lengths of 16 to 22 inches, offering anglers surprisingly hard fights due to their explosive power and rapid acceleration.

Feeding on everything from fish to ducks, pretty much anything willing to get wet is on the menu. That appetite, enabled by sharp teeth, keen eyesight, and strong muscles, can allow pike to grow as large as 59 inches and 63 pounds! 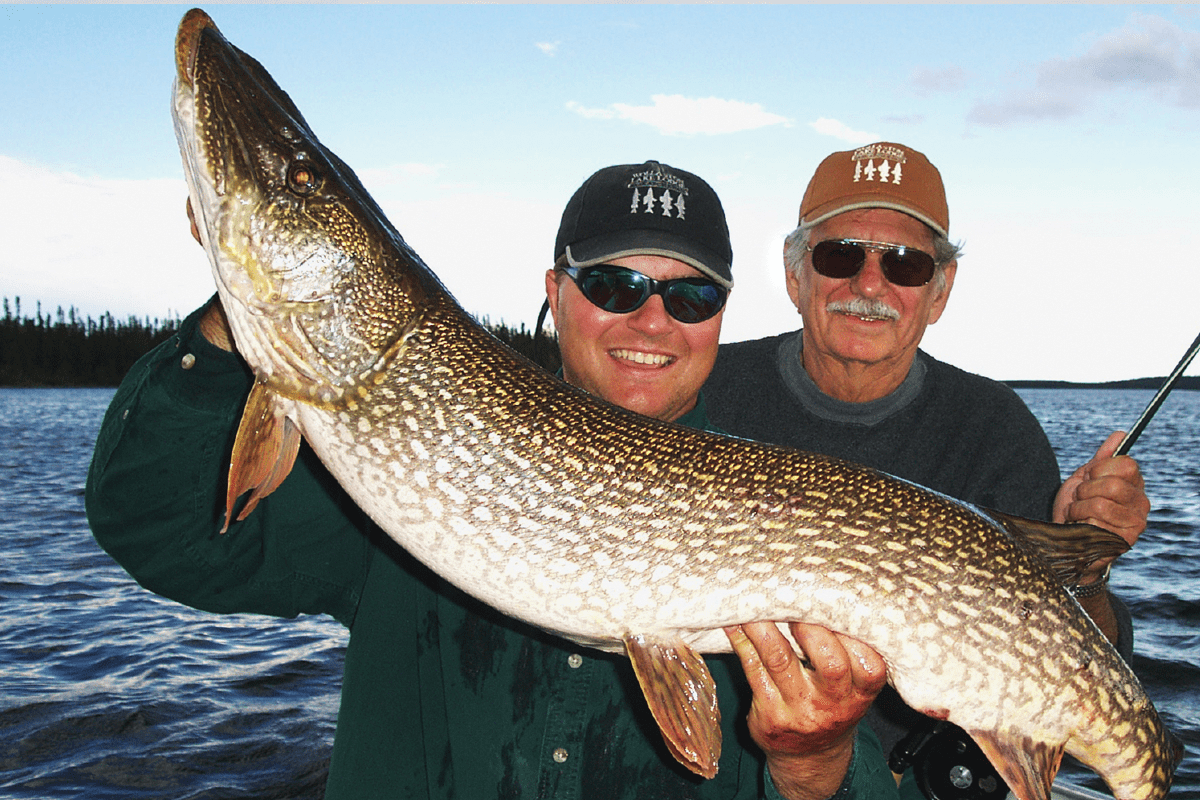 Pike tend toward a greenish color, sporting long spots along their length.

Pike tend toward a greenish color, typically sporting prominent, slightly horizontal spots along their length. Their tails end in a rounded fork, and their heads are long and slender, holding mouths packed with sharp teeth.

Muskie grow a bit larger than the average pike, reaching common lengths of 28 to 48 inches. Like their cousins, they are indiscriminate predators, feeding on anything they can. Pike are the apex predator wherever they’re found, and they can consume meals as large as 2/3rds their size!

Trophy muskie can grow to 6 feet in length, weighing up to 70 pounds! 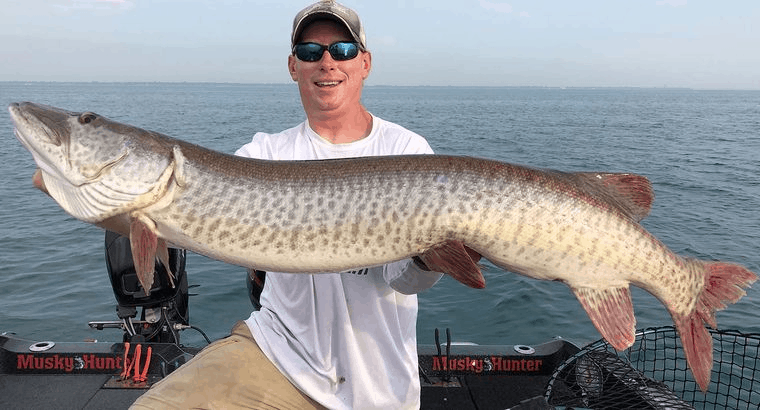 The silver scales of this muskie contrast with its reddish fins.

Muskie tend toward a silver hue with a vertical pattern of spots. Their fins are often a reddish-pink color, like the flesh of fresh salmon.

Like pike, you’ll find a forked tail on one end, and a long, sleek head full of teeth on the other.

Pike vs. Muskie: Easy Identification by Scale, Tail, and Jaw

Pike and muskie share more than a passing resemblance. Relying on scale color and pattern isn’t always reliable as a method of identification, though it’s a good place to start:

Pike tend to have spots that stretch horizontally.

Muskie tend to have vertical stripes or bars made of spots. 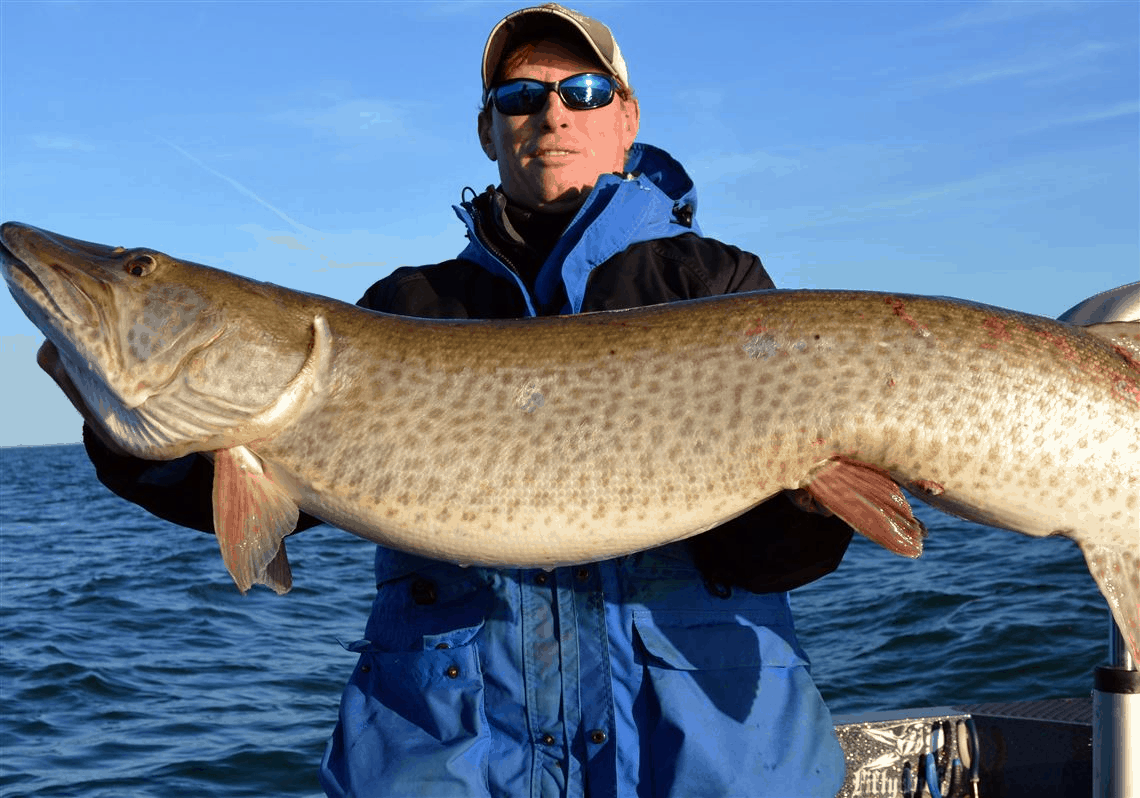 Is this a pike or muskie, judging from the scale pattern alone?

Another good place to look is the tail. While both species sport a fork, the tips are much sharper on the muskie than the pike, offering a second point of identification:

Pike tend to have rounded forks on their tails.

Muskie tend to have sharp forks on their tails. 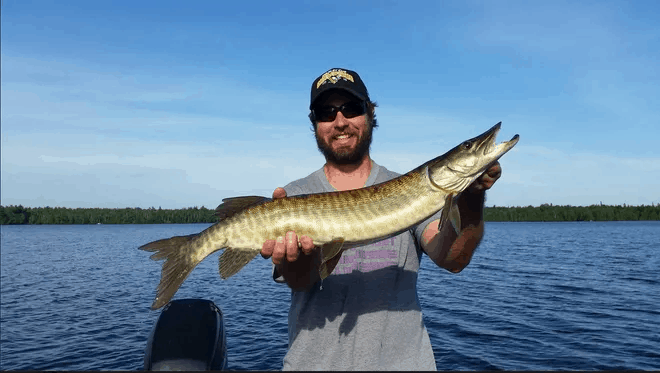 The tail fins on this muskie are sharp.

As good as these clues can be, scale and tail patterns vary.

The best way to be sure is to count the pores on the underside of the jaw:

Pike have six or more pores on the underside of their jaw.

Muskie have five or fewer pores on the underside of their jaw. 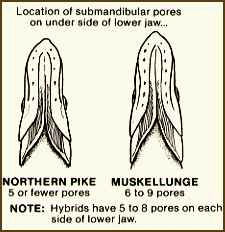 There are differences to the scale pattern on the cheeks and gill plates of muskie and pike, too, but in practice, the surest way to identify the species is by counting these jaw pores.

Pike and muskie can breed but rarely do in nature. When they do, they produce what’s known as the tiger muskie. 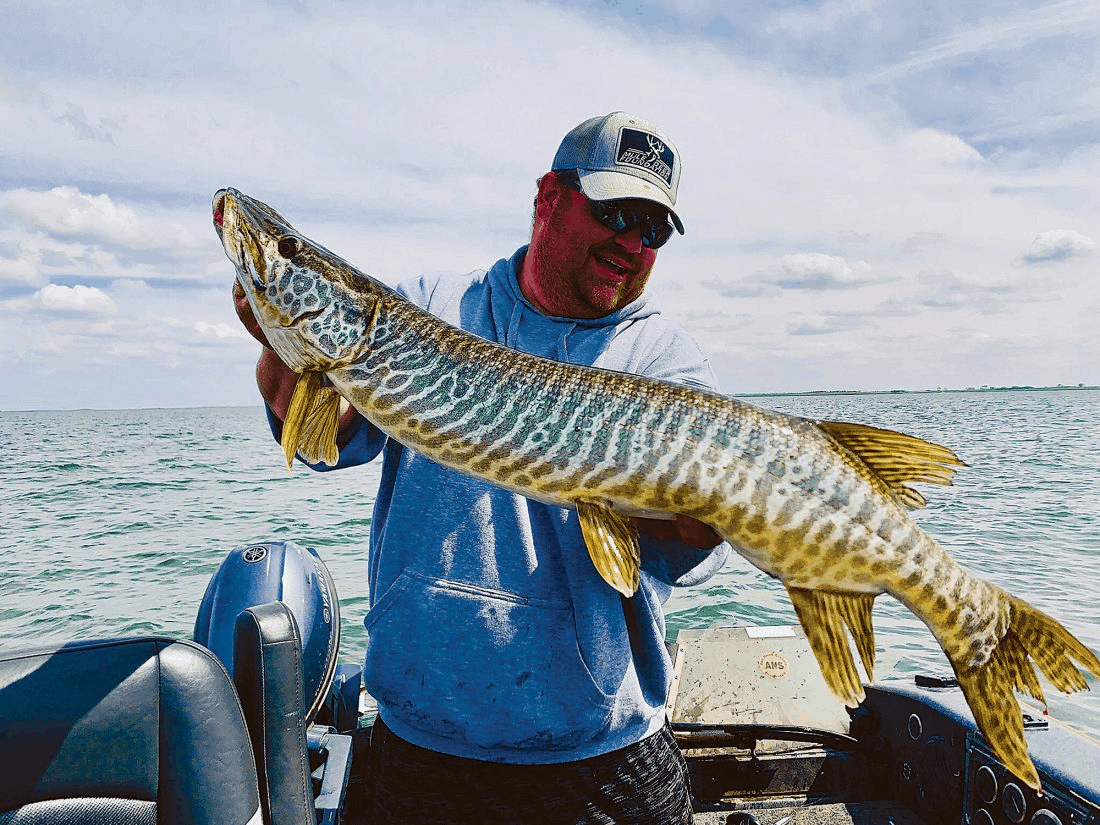 The tiger muskie is simply beautiful!

Wildlife biologists will sometimes intentionally breed pike and muskie to produce tigers, using these sterile fish to safely stock lakes with trophy fish that can’t get out of control.

Positively identifying these tiger muskie can be tough, as they share the traits of both species.

Wildlife biologist John Casselman notes that the only true test is comparing the head length in proportion to the body size. “In northern pike and muskellunge, the head length is about one-quarter of the total body length. Hybrids, or tiger muskies, on the other hand, have much bigger heads, reflective of what appears to be hybrid vigour in their bone growth.”

“If you look at the relative size of the head on a hybrid (tiger muskie), it approaches one-third or 30-percent of its body length,” he says. 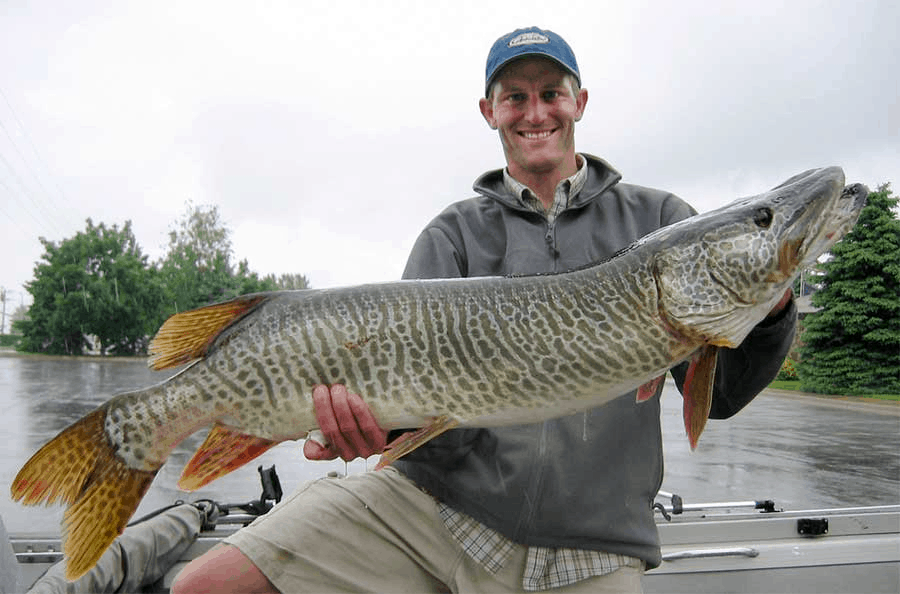 For trophy pike and muskie, there’s just no question that a medium-heavy to heavy rod is king, and I prefer my rods on the tough end. For me, that means composite fiberglass/graphite construction, and I’m partial to Shakespeare’s Ugly Stik Elite, whether I’m favoring spinning or baitcasting tackle that day.

I own two of these rods for pike, and they never fail to impress me with their backbone, casting, and fight-winning strength.

If I’m chasing monsters, I’ll skip right to the conventional reels, and the Penn Squall Lever Drag is my top pick. With capacity to spare, drag that just won’t quit, and plenty of torque and speed, it’s the monster-tamer you want on a tough rod.

For more average pike and muskie, a medium-power rod isn’t too light, as long as it’s paired with a good reel capable of providing plenty of smooth drag. Two of my favorites are the Shimano Curado K and the Okuma Ceymar in size 40.

Both of these will work well on a medium-heavy rod, too, and as an all-around pike combo, they’re very hard to beat.

I never hit the water for either species without a good selection of spoons, crankbaits, spinners, and soft plastics, and you should take a look at our previous articles on the subject:

Positive species identification is essential to conservation as well as protecting the sport we all love for future generations.

We hope that this article has helped you hone your ID skills, and if it has, we’d love to hear from you!