Lowrance Elite FS 9 Reviewed: Is This the Best Mid-Range Fishfinder on the Market?

As long-time readers of USAngler will know, we continue to be strong advocates for the mid-range fishfinders offered by Lowrance.

Packed with powerful, but affordable, tech, they offer a sweet spot between capability and price that savvy anglers crave.

How does the Lowrance Elite FS 9 with Active Imaging 3-in-1 stack up to this tough competition? 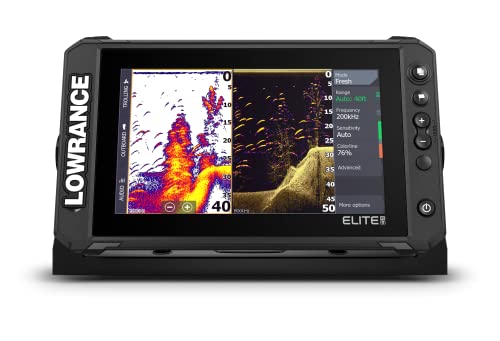 Right off the bat, it’s important to note that there is a superior Elite FS 9 to this model, one that’s available with Active Target capability.

But with a price tag that rivals the HDS LIVE series, we’d go ahead, bite the bullet, and upgrade to the Lowrance HDS Live 12, our pick for the best no-holds-barred fishfinder of 2023.

Lowrance’s Elite FS series has been unseated by the ultra high-end HDS Live lineup, and all but that one pricey model of the Elite FS 9 have been relegated to the mid-range. In practice, that’s not a bad thing at all, as the price of the super-capable Elite FS 9 with Active Imaging 3-in-1 has stabilized at about half of the flagship model.

With an excellent screen, awesome sonar, and amazing mapping abilities, the Elite FS 9 with Active Imaging 3-in-1 should be on every serious angler’s wish list.

The Elite FS 9 sports a 9-inch diagonal screen with excellent resolution and very good brightness, producing more than 1200 nits. Even in bright sun, that makes its detailed screen easily legible, and with viewing angles of 50° to the top, 60° to the bottom, and 70° to either side, you won’t need to stop fishing to see what’s under your hull.

Image quality is uniformly excellent, and detail is great.

Overall, I’d give the nod to Lowrance here, as I think its screen quality just edges out the Humminbird.

Lowrance’s user interface is fairly intuitive and not hard to learn and master. Operated by a combination of small buttons and a touch-sensitive screen, just a few minutes with the manual and a little time on the water will have you unlocking the full capacity of the Elite FS 9.

Most anglers will find the Lowrance easier to use than the Humminbird, and the Elite FS 9’s touch screen makes a huge difference on the water, especially when it’s not as calm as you’d like.

This Elite FS 9 is equipped with a powerful Active Imaging 3-in-1 transducer, and the control head’s software supports an upgrade to the much more expensive Active Target model if you’d ever want to upgrade.

The Active Imaging 3-in-1 broadcasts on both CHIRP and conventional modes, offering low frequencies (50 kHz) that punch through the water column as well as frequencies as high as 200 kHz in CHIRP and 800 kHz in conventional mode. This combination of modes and frequencies enables fantastic target identification and detailed imaging, especially when side scanning for structure and cover.

And while Lowrance doesn’t publicize target separation numbers or transducer beam angles, in the real world, we’d guess that these are roughly comparable to the Helix series.

Keep in mind that until very recently, the Elite FS was the flagship Lowrance series, offering what was then the very best fishing finding tech the company could produce. That performance is no less impressive now, and with the exception of Active Target, a live picture of the water below your boat, there’s no difference in capability between the FS Elite and the HDS line up.

For savvy anglers, that makes the Elite FS 9 with Active Imaging 3-in-1 a very good buy and the closest thing to a bargain you're likely to find in the fishing world.

Lowrance/Simrad has decades of experience in marine navigation and GPS, and the positioning system and waypointing on the Elite FS 9 reflects that.

This unit comes with the company’s exceptional C-MAP Contour+ pre-loaded maps, covering more than 15,000 lakes in the US and an additional 9,400 plus lakes in Canada. Moreover, the Genesis Live system enables you to generate, share, and download 1-foot increment bathymetric maps, a game-changer for anglers who’re serious about finding fish, scouting lakes, and winning tournaments.

The Lowrance Elite FS 9’s connectivity options aren’t as robust as the HDS PRO series, but still include wireless, NMEA 2000, and Ethernet connectivity. This allows for networking with other fishfinders, as well as touchscreen control of Power Pole anchors and the Lowrance’s Ghost trolling motor.

That’s powerful connectivity in anyone’s book, and only professional anglers will need more than the FS Elite 9 can deliver.

Lowrance and Humminbird are typically neck and neck at the high-end and mid-range, with Garmin offering comparable flagship models but falling off below that.

For anglers looking for awesome tech, that mid-range really is great territory to hunt for a bargain, and there’s no question that the reasonably priced FS Elite 9 with Active Imaging 3-in-1 is a good buy.

An excellent touch screen and easy-to-navigate user interface compliment excellent brightness, fantastic viewing angles, and impressive detail. The Active Imaging 3-in-1 transducer provides powerful CHIRP and conventional sonar, supporting side scanning that’s hard to match. And with mapping and networking options that are sure to impress, this Elite FS 9 is simply a great option for serious anglers who can’t or won’t pay for the HDS PRO.