Serious anglers understand the need for powerful fishing electronics, and from clear imaging to accurate mapping and waypointing, they've come to expect premium performance from their fishfinders.

Unfortunately, the current crop of top-end electronics will set you back quite a bit. The flagship models from Humminbird, Garmin, and Lowrance are amazing, no question about it, but for most of us, they’re well out of reach.

The good news is that fishing tech has advanced so rapidly that yesterday’s best has been quickly eclipsed by the new.

Humminbird’s Helix line-up, once the best that company could offer, is now a mid-range option with a reasonable price tag and performance that’s so good you won’t believe your eyes.

Is the Humminbird Helix 7 - in its most powerful variation - a good buy for a serious angler? 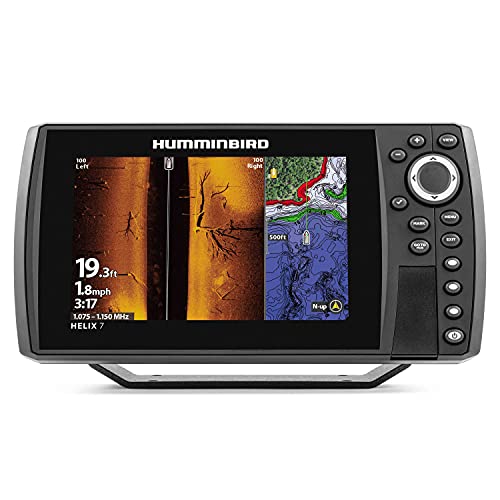 Target Separation: no less than 2.5”

The Helix 7 CHIRP MEGA SI GPS G4N is a super-capable fishfinder that’s surprisingly inexpensive for the tech it offers. And while it can’t match the huge screens of the Solix or Apex series, if you can live with a 7-inch diagonal, you’ll get performance that is startlingly close to these much pricier models.

Because while there’s no doubt that the Solix and Apex are the more powerful fishfinders, a lot of the improvements are at the margins of performance - the dessert, but not the meat and potatoes. And unless you’re the kind of person who needs the latest and greatest, this Helix 7 is so good that you’ll be scratching your head and wondering why you’d pay more.

Let’s back it up.

The Helix 7, as you’d expect, sports a 7-inch diagonal screen with excellent resolution and image quality. Sharp and detailed, it’s bright enough to be legible in full sun, and the side-viewing angles are pretty darn good.

Humminbird makes good screens, and the Helix really reflects that. And while in no sense competitive with the Apex 19 or top-end models from Garmin or Lowrance, if you can live with this size, you’ll find that sometimes less is more.

Humminbird user interface relies on a set of small buttons placed to the right of the screen. If there’s a thing about the Helix (and Solix and Apex) that we don’t love, it’s that Humminbird’s UI can be complicated, and unlocking the full features of your fishfinder may take some careful study of your manual as well as some trial and error on the water.

That’s true of Lowrance, too, with only Garmin really nailing simplicity and ease of use, in our opinion.

The reward for learning your way around the Helix is that its sonar capabilities and imaging are simply amazing.

No matter how big, bright, or clear the screen, the heart of a fishfinder is its transducer.

In this case, Humminbird pairs the capable Helix 7 CHIRP MEGA SI GPS G4N with the XNT 9 HW MSI 150 T, a legendary transducer capable of impressive side- and down-imaging.

Broadcasting in both CHIRP and standard sonar, it offers low frequencies to penetrate the water column as well as ultra-high frequency MEGA options that provide startling detail and incredible fishfinding. You simply won’t need more range than this transducer provides, and with both tight and loose angles, you’ll be able to locate fish and target them precisely.

Target separation is excellent as well, and this unit is more than capable of differentiating a fish from a bait cluster.

The Helix 7’s MEGA side- and down-imaging is remarkably detailed and still impressive despite the “mid-range” moniker attached to this series.

That’s not unearned praise: the quality of Humminbird’s mid-range transducer reflects what was once the flagship model for the company. Just a decade ago, the Helix 7’s performance was revolutionary, and the powerful imaging it offers was game-changing.

Realistically, that’s still the case. The fish haven't gotten harder to find, nor has the bottom gotten tricker to image!

The one issue we have with this otherwise incredible transducer is that the plastic hardware securing it can be fragile. We’ve seen it break without impact, and we’d strongly recommend a more robust (stainless steel) hinge.

GPS and mapping, once high-end offerings, are now more or less standard to fishing electronics, and the good news is that the affordable Helix 7 offers both.

Precise GPS location allows waypointing, and with i-Pilot-enabled propulsion (MinnKota), autopilot options allow you to focus on the fish and not your trolling motor and position.

This Helix 7 comes equipped with Lakemaster pre-loaded maps, as well as AutoChart, a tool that generates real-time bathymetric maps that can be imported to your PC.

This isn’t next-gen tech, and we prefer the mapping software offered by Garmin and Lowrance, especially given that these companies enable map sharing online. That’s a huge win for anglers on new water, and the Helix just can’t compete on this front.

Nevertheless, AutoChart is capable mapping software in its own right, and the maps it produces are still as game-changing as they ever were.

And, of course this Helix 7 is capable of networking with other fish finders, allowing you to run more than one unit simultaneously. That’s as effective with this mid-range model as it is with an Apex, and not a feature to be ignored by anglers who demand complete visibility below the surface.

Tournament pros may not need to make trade-offs with their electronics, but the rest of us almost always need to weigh price versus performance.

While the mapping tech may not be the best, the hardware attaching the transducer could be beefier, and the screen is a bit small by today’s standards, this was a flagship model not too long ago.

And given the amazing tech it packs for the punch to your wallet, it’s still an awesome choice for serious anglers who can live with a relatively small screen.