How to Hook a Live Worm: An Easy-to-Follow Guide

Fishing with live bait is a time-honored tradition, and most anglers get their start - and never stop loving - throwing a worm under a bobber of some kind.

Easy to rig and terribly effective, live worms are among the most common bait choices pretty much anywhere you fish in America.

But if you're new to fishing, you may be a bit confused about how to rig a fat nightcrawler, because as obvious as it seems, there’s a right and wrong way to hook your worms.

Want a quick tutorial on how to hook a live worm?

Start with the Right Hook

While any hook can hold a worm, there are better and worse choices.

And if you know you’re going fishing with live nightcrawlers, it pays off to pick a hook designed for just that purpose.

Baitholder hooks sport a long shank that’s been sliced to create tiny upward-facing barbs. Those barbs hold your worm in place, keeping it put even when tiny nibblers try to steal your bait.

You’ll want to size your hook for the fish you're after, and for most panfish, anything in the neighborhood of a #4 all the way down to a tiny #12 can work.

For bluegill and other sunfish, give a #6 Eagle Claw baitholder a try.

They come pre-snelled, meaning that they’re attached to a short length of tough leader, allowing them to be easily attached to the end of your line.

How to Hook a Live Worm

These are both great examples of WHAT NOT TO DO. 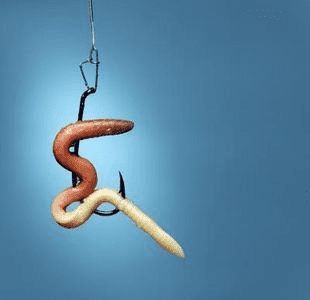 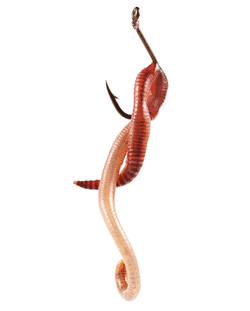 Now, you might be tempted just to run the sharp end of your hook through a nightcrawler and call it a day, but you won’t be doing yourself any favors!

Instead, start with the head of the worm and run the hook straight into the top of the head, feeding the worm’s body onto the hook as you slip it around the bend toward the shank.

You'll notice that those upward-facing barbs let you slide that worm’s head up toward the eye - and that’s something you want to do.

Keep feeding that worm upward until you’ve got the head snug against the eye, or even over it a touch.

When you’ve got the right amount of worm on your shank, pass the point out of the worm’s body and let the rest dangle free. 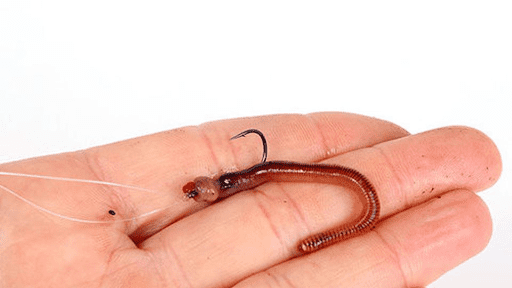 This is the kind of thing you’re looking for.

Ideally, you’ll have a little bit of worm trailing free from the end of the hook, and that’s ideal. But too much is just a free meal, so be ready to snip off the tail as needed.

Now, if you’re using tiny worms, the process just starts with a pass of the hook into the body below the head and then continues as above. You’ll have some head running off to one side, too, and that’s just fine!

Ideally, your worm is alive and wriggling and stays that way for some time. But check every few minutes to make sure a clever thief hasn’t stolen your worm, and switch to a new one if yours has really lost its mojo.

So there you have it: everything you need to know to rig a live worm on your hook.

Of course, there’s more to fishing than that, and you’ll need to consider everything from the right line for panfish, to the right float, to the best panfish rod and reel for your panfishing.

We hope you’ve learned something from this article, and if you have - or if you have something to add - we’d love to hear from you!