How To Hook Live Bait: Head to Tail

First, you want to keep your bait on the hook.

Second, you (generally) want to keep your bait alive as long as you can.

And third, you want to place your hook where it has the highest probability of a strong hookset.

That doesn’t sound too complicated, and it’s certainly not as mind-bending as filing a tax return with the IRS. But it isn’t as simple as it might seem, either.

Many of the most common hooking techniques also affect how the bait behaves, causing it to dive, swim head up, or run far and fast. That can make a huge difference in your catch rate, and knowing the ins and outs of hooking live bait is one thing that separates the weekend angler from the pro.

Jaw or lip (and both) hooking

Two hooking methods focus on the mouth area of the bait: jaw and lip hooking.

To jaw hook your bait, you pass the point into the mouth and up through the upper jaw, forward of the eyes. This creates a more secure connection than lip hooking and typically exposes more of your hook. 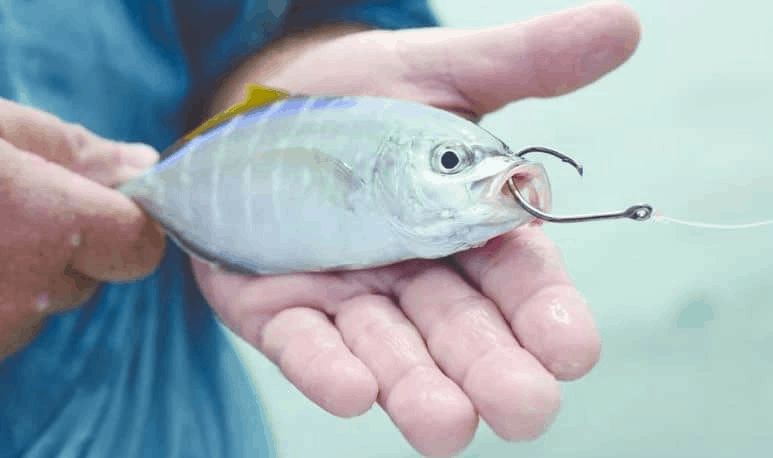 Blue runner, Jacks, and Pacific Mackerel are frequently rigged in this style, adjusting the hook size and style as necessary. They’ve got enough mass in the forward area of their head to hold a hook securely.

But freshwater anglers know that this technique works just as well with minnows and shad.

Keep your bait alive with the best minnow bucket

By entering the mouth and turning the point down and through the lower jaw, you lip hook your bait. This is not as secure as jaw hooking, as there’s typically less tissue to hold on the cast.

Both techniques shouldn’t seriously injure your bait as the hook passes clear of the brain and eyes. As a result, they’ll keep kicking for a lot longer, making these excellent options especially for smaller baits like minnows and menhaden or shad.

For Ballyhoo and Northern Anchovy, a similar technique can be used. Pass your hook from under the jaw up and through the head, forward of the eyes and brain (and with Ballyhoo, break off the beak to avoid line damage).

This creates a much stronger connection than the jaw or lip alone while still doing little serious injury to your bait. Ideal for slow trolling, this is a great way to make use of a circle hook on live bait, and there are very, very few species with which this hooking technique won’t work well. 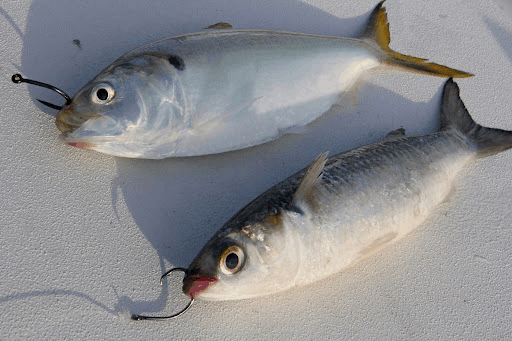 Hooking your bait through both its upper and lower jaw is very secure, but it doesn’t allow it to breathe well.

But your bait can’t breathe quite as well as with a jaw or lip hook alone, and it won’t live or kick nearly as long.

This may sound strange to the uninitiated, but for many species, nostril hooking is both secure and non-damaging. The idea is to pass the point of the hook horizontally through the “nostrils,” again well forward of the eyes and brain. There’s nothing vital nearby, so the bait will live quite a while. 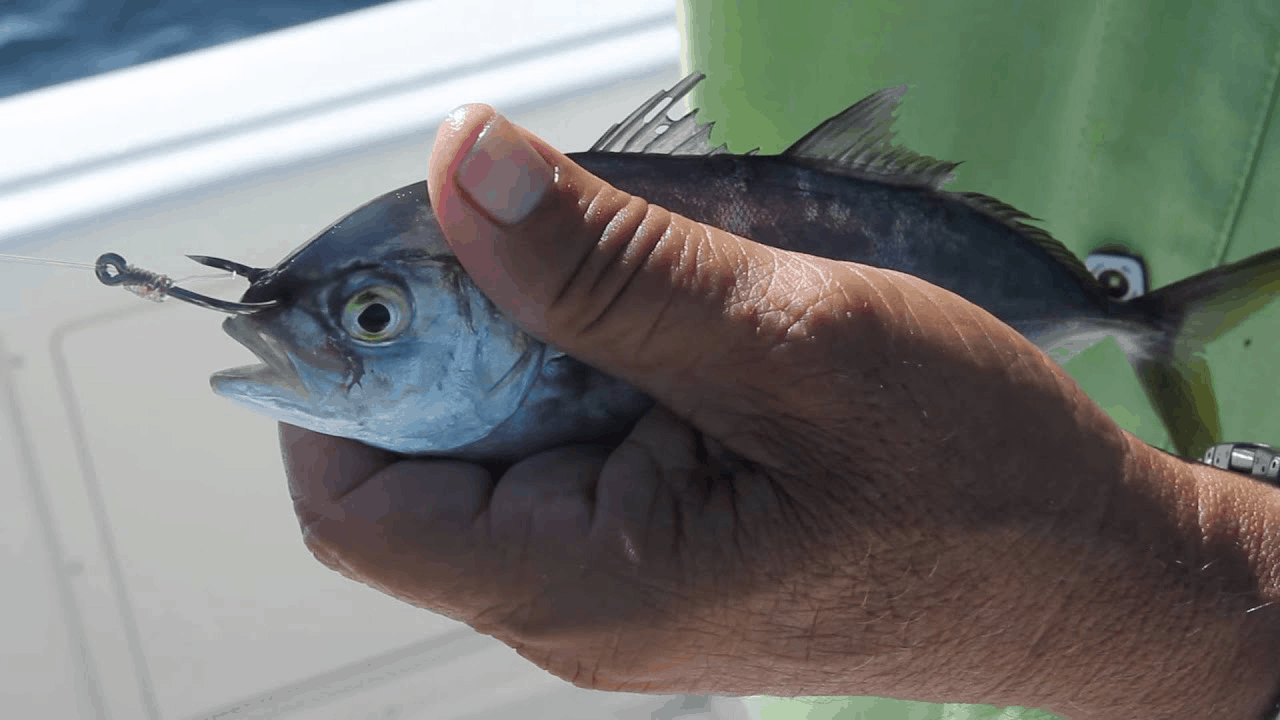 Nose hooking is very secure in most bait species.

Pacific Sardine and Pilchard are just two examples of species for which this technique is common, and it has several decided advantages.

First off, the hook is secured in a more-or-less unmoving position that doesn’t allow the point to be buried as the bait struggles. That leaves the barb free to work and generally improves hook-ups.

And, of course, the bait fish is in good shape, leaving it swimming for all its worth.

I like this technique for fishing over a reef with live bait, and I’m far from alone in this preference. Snook, Tuna, Grouper, Amberjack: they all love to hit bait rigged this way.

Moving further back on your bait, you can pass the hook through the throat or pectoral area, below the eyes and brain. Depending on your placement, this can almost immediately kill your bait or leave it swimming for a minute or two.

That sounds counterproductive, I know, but hear me out.

When your quarry is swimming in the middle of the water column, sending live bait barreling through that region is a great way to attract attention. And throat hooking does just that - it forces your bait to take a deep dive with its last reserves of life. Free spool and wait for it: that dive is going to draw a predator in for a closer look.

Pacific Sardine, Pilchard, and Threadfin Herring are typically rigged in this way, but I’ve seen everything from Menhaden to Shad throat hooked to equal effect. So the next time you’re fishing deeper water for pike or lake trout with live bait, give heart hooking a try.

Back or dorsal hooking

Above the abdomen, fish are more or less solid muscle and spine, and the area near the dorsal fin makes a great place for a hook. 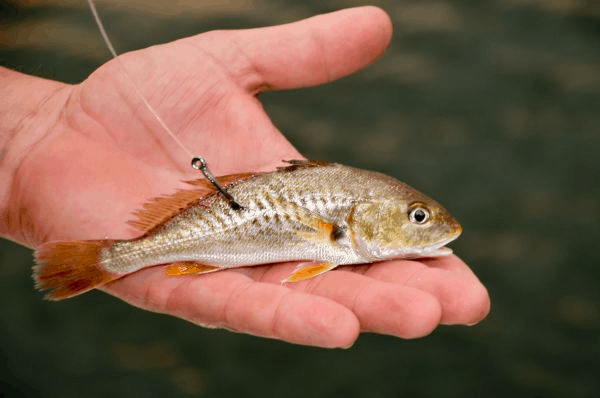 Dorsal hooking is very secure, and it lets the bait live a long time.

The idea with back or dorsal hooking is to run the point through the fish where the connection will be solid and unlikely to tear, while not injuring anything critical. That keeps your bait on your hook and keeps it alive longer.

Blue runner and Pilchard benefit from fore-dorsal hooking, especially if their predator species are hunting a bit lower in the water column. But this is another live bait hooking technique that works on many bait fish species, including those commonly used in freshwater.

While it lives, your bait is going to writhe for all it’s worth, making this technique a great choice for low light and low visibility conditions.

Keep in mind that you’ll need to replace your live bait quickly and often.

When you need to reach spots you simply can’t cast to, tail hooking is a great option.

Typically, this means that you can expect a more or less straight line of travel from the cast, as the bait is reacting to the sensation of being trapped. For pier or surf fishing or when you need to send bait into tight, hard-to-reach spots, this can be a godsend.

Effectively, this technique extends your casting range quite a bit, while also upping the ante on vibration.

Hand-sized crabs make excellent bait for everything from reds to cobia, and the trick is to use a sharp, short-shanked hook. 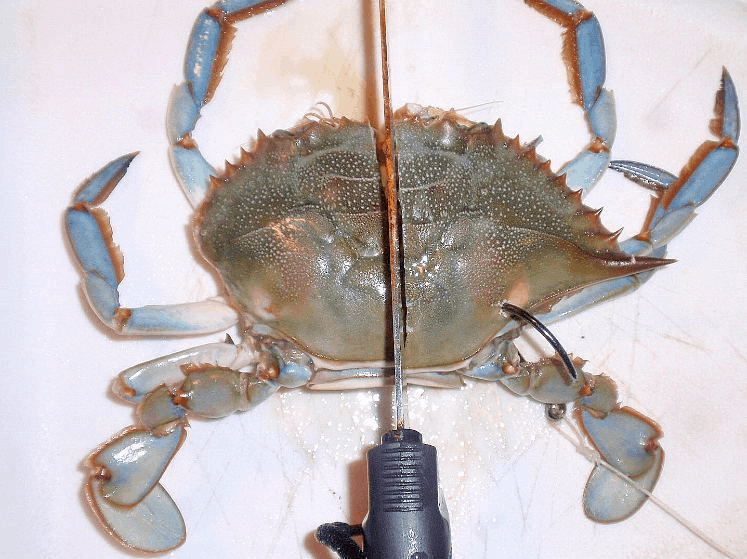 Instead of pushing the point through the edge of the crab’s shell, try rotating it to “drill.” That way, you don’t damage the shell as much, keeping the crab’s bodily integrity intact. That’ll make for a more robust bait that’s harder to steal or fly free on the cast.

Larger crabs can be cut in half, of course, and whatever their size, it’s important to match your hook to the bait.

The first thing to realize about shrimp is that they swim backward. The second is that piercing the head is going to kill it pretty quickly.

When you look carefully at a shrimp, you can see a transparent area on the top of the head that’s just behind the eye. There’s nothing vital there but hard shell, and if you run your circle hook through that space, you’ll have a live, kicking shrimp that sports a clear barb.

You can essentially do the same thing at the tail, running the point of your hook through the tough shell at the rear, just above the fin.

But a variation that I prefer provides a very natural presentation.

Begin by removing the tail. Then, push your point through the tail, wrapping the shrimp around the curve of your hook and coming back out high in the body, behind the head. This creates a low-weed, realistic presentation that really works.

More on hooking shrimp: How To Hook Live Shrimp

See how to do it here:

Rigging squid is pretty simple. Just run an appropriately-sized octopus or circle hook through the flesh behind the “nose.”

Rigging squid is easy to do.

For the vast majority of applications, that’ll do just fine.

There are more complicated techniques involving bridles, but this gets the job done most of the time.

We hoped you learned something! Check out our buying guide for the best fishing hooks based on technique and situations