Is It Legal to Use Goldfish as Live Bait? A Bad Idea Explained

At first glance, goldfish look like an attractive live bait option. Easy to come by in pet stores and giant retailers, goldfish are readily available pretty much wherever you live and fish. And there’s no questioning their hardiness, which is why they’re popular for small aquariums and as first pets for kids.

But most states forbid the use of goldfish as live bait, and among those that allow them, there’s pressure to restrict their use.

If you want to better understand the legality of using goldfish as live bait and get a handle on the reasons it’s a bad idea, keep reading!

Goldfish, Carassius auratus, are closely related to carp. Selectively bred for their bright colors and ability to thrive in well-kept aquariums and decorative ponds, goldfish have been a staple of water gardens in China for at least a 1000 years!

Unfortunately, goldfish have often been released into the wild, intentionally and unintentionally, where they do just fine in most freshwater habitats.

Essentially any lake that can support species like trout, bluegill, walleye, or bass will provide a perfect home for goldfish.

That may not sound like a big deal: can a tiny fish like this really do much ecological damage?

Unfortunately, the answer is a resounding yes!

Two issues arise from the introduction of this invasive species.

First, goldfish are extraordinarily prolific breeders. Laying as many as 40,000 eggs a year, each female can spawn multiple times a year, producing an explosion of goldfish in no time.

Even the hungriest predators are going to find it tough to keep up with that, and it won’t take long for goldfish to become the dominant species in the wild.

Second, goldfish - like the carp to which they’re closely related - feed by disturbing the bottom. In shallow lakes and ponds with silty or muddy bottoms, this creates high levels of turbidity, clouding the water and greatly reducing visibility.

And since most game species are predominantly sight predators, highly turbid water will stunt their growth and survival rates, dramatically decreasing the quality of the fishing.

And to add insult to injury, goldfish produce a lot of waste as they eat, encouraging the overgwroth of algae and reducing the oxygen content of water, especially in the summer.

Is it Legal to Use Goldfish as Live Bait?

Many states recognize the threat that goldfish pose to the environment, to say nothing of the effect they can have on fishing quality.

As a result, using goldfish as live bait is generally not legal, though there are states where this practice is still allowed:

In Florida, North Dakota, and West Virginia, it’s currently legal to use dead goldfish as bait.

Elsewhere, the use of live goldfish is forbidden by law.

But since regulations change rapidly, you should contact your local wildlife agency to check on the legality of fishing with goldfish as live bait.

Don’t take our word for it!

Whether it’s legal or not, it’s simply a terrible idea to use goldfish as live bait.

The potential destruction to the environment - and the almost certain impact on fishing quality - just isn’t worth the convenience of driving to Walmart for your live bait.

If the goldfish you’re using as bait manage to escape, you could be crushing any future fishing at that spot, and that’s something none of us want.

Instead, we recommend two alternatives.

If there’s a local bait store near you, fathead minnows and golden shiners are much better options. Fatheads, in particular, are amazingly robust and no danger to the environment.

We’ve written about fishing with minnows before, and if you want to know more about selecting the best minnows, keeping them in top condition, and rigging them for the greatest effect, check out this article:

Crappie Fishing With Minnows: A Guide To Rigging Minnows for Crappie

If you don’t have ready access to a bait store, don’t worry! You can bait a trap like the one offered by Frabill, with nothing more exotic than stale bread or dog food, and have an endless supply of locally-sourced minnows that the fish you’re chasing are primed to strike. 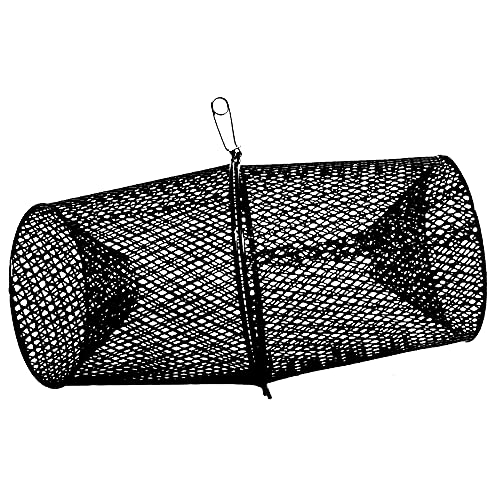 A minnow trap like this is a great investment in live bait.

But just like goldfish, locally-caught minnows can constitute a threat to bodies of water to which they’re not native.

Never catch minnows in one place and use or release them in another.

While some states still allow the use of goldfish as live bait, it’s a bad idea and a fishing-quality threat just waiting to happen.

A small breeding population of goldfish resulting from a mistake during fishing will quickly kill the water quality in your favorite lake or pond, and that’s something we all want to prevent.

So even if you can, you really shouldn’t use goldfish as live bait.

We hope you learned something from this article, but if you have any questions, we’re here to answer them!