Do Carp Eat Other Fish?

Do Carp Eat other fish? The short answer is no.

While dominantly herbivorous, carp are opportunistic omnivores, and in very, very rare circumstances, if they get the chance to swallow a fish - live or dead - they’ll take it. But there are better bait choices for carp than minnows, live or dead.

But chances are, if you’re asking this question, it’s because you’re concerned about the appearance of carp in ponds, lakes, or rivers where you’re targeting species like smallmouth and largemouth bass.

And in large enough numbers, carp can be detrimental to these species, cutting their numbers down and decreasing their average size.

But it’s not through eating them. Instead, carp damage the ecosystem, making it less friendly to sport fishing species like bass.

To understand why, keep reading! 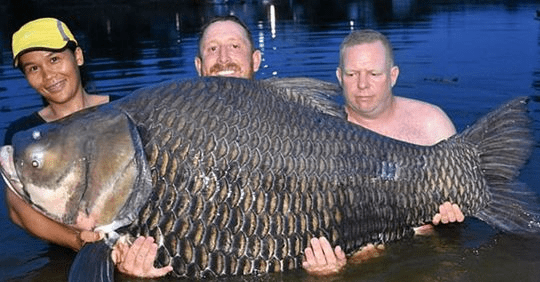 Carp can grow to enormous sizes.

Carp are classified as omnivores, meaning that they eat both meat and plant matter. But though they will consume protein-rich food sources like insects and marine invertebrates like mussels, clams, and crayfish, they are largely herbivorous and almost never prey on other fish.

Instead, they consume huge amounts of aquatic plants, rummaging along the bottom for their meals.

We’ve written about carp before, including covering their diet.

If you’d like the full information on what carp eat, please take a look at this article:

What Do Carp Eat?

So while carp are largely herbivorous, throwing the occasional snail, mussel, or bug just might get you some attention when nothing else is working.

What won’t work is a fish, alive or dead.

The idea that carp are piscivorous - fish eating - is a myth that stems from their negative effect on other species.

Scientists have confirmed that “While Common Carp do not feed on other fish or fish eggs intentionally, Common Carp can, at high densities, increase the turbidity of the water, at least in shallow silt bottom ponds.”

Just take a look at this before and after pic. In which situation do you think bass fishing would be better?

This increase in turbidity is detrimental to species like largemouth bass, which are dominantly sight predators.

When we examine a bass’s brain, measuring its parts relative to one another, we discover that sight is the sense given the greatest amount of brain power. As Chris Horton at Bassmaster reports, “The ocular lobe of the bass is huge, relatively speaking. This means that the fish invests much of its neurological resources in its ability to see.”

When bass are robbed of their ability to sight hunt, they can rely on their lateral line to loathe prey, but this is a very short-range sense, limited to 6 to 7 feet.

What that means is that as water clarity decreases, bass find it more and more difficult to feed. Some will starve, others will endure, but none will grow to trophy size.

Marine biologists have confirmed that “Large populations of common carp can both directly and indirectly affect water quality, water clarity, aquatic habitat, and species richness (i.e. sport fish populations) within the lake system.” This happens because carp “forage by disturbing as much as the top 20 cm of lake sediment,” and in water bodies where the bottom is fine, loose sediment, this results in vastly decreased water clarity.

Moreover, the more carp you have, the more excrement they introduce into the water, encouraging blue-green algae overblooming.

So the problem, then, isn’t that carp eat immature bass, bluegill, or any other sport species, but rather that in feeding on aquatic plants, they decrease water quality to the point that most other species struggle to thrive.

So there you have it, carp do have a negative effect on bass populations, but not because they eat the juveniles. Carp almost never feed on fish, alive or dead, but the damage they do to water quality can really hammer largemouth, smallmouth, and other game species.

We hope you learned something from this article today, and as always, we’re here to answer any questions you might have.

Please leave us a comment below, and we’ll be in touch!