Difference Between Buffalo Fish And Carp

The main difference between bigmouth buffalo and carp is that bigmouth buffalo have pale silver to grayish brown or even dark gray to black scales, forward-facing mouth, eyes high on the head, sharp points on the tail fit and a wide, and sickle-shaped dorsal fin. Carp have gold to copper shiny scales with a deep color, long sickle-shaped dorsal fin, and pronounced barbels near the mouth.

As bowfishing has grown in popularity, the once-despised carp has gained a following among anglers. And while it’s still unlikely to be fished by rod and reel, targeting carp species with a bow and arrow is increasingly common.

It’s easy to see why: launching arrows into the water and fighting massive carp back to the boat is a heart-pounding style of fishing that’s anything but “sit and wait.”

Unfortunately, species that resemble grass carp are often mistakenly skewered by bow fishermen with the best intentions, and for some species, that can be a big problem.

The bigmouth buffalo is one example of this issue, and it’s imperative that bow fishermen understand the problem and know the difference between it and the carp they’re hunting. 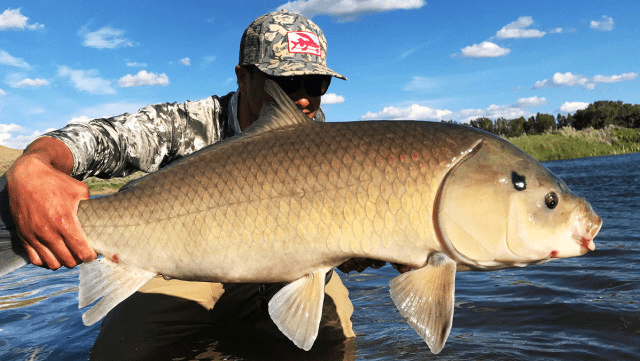 It’s easy to see why the bigmouth buffalo is confused with the carp.

Known to science as Ictiobus cyprinellus, anglers in Canada and the US call this fish a variety of names: buffalo fish, bernard buffalo, brown buffalo, gourdhead, marblehead, redmouth buffalo, and roundhead.

Whatever you call it, it’s not a carp, and it’s a species native to North America.

Physical maturity brings a maximum length of about 4 feet at which time a bigmouth buffalo will weigh in at roughly 80 pounds.

Bigmouth buffalo like slow-moving or still water, preferring lakes and lazy rivers for their home. This species prefers habitats that are rich in aquatic vegetation, and they can tolerate the very low oxygen levels that this environment creates.

But they’re not there to eat the plant life: the bigmouth buffalo is a filter-feeder that specializes in microscopic plankton, including the larval stage of the invasive zebra mussel. This is an unusual diet for freshwater fish, and it really sets the bigmouth buffalo apart from similar-looking fish like the carp.

It’s fair to say that bigmouth buffalo are understudied by marine biologists and that with the growth of bowfishing, the species’ conservation status needs a reassessment. Slow growth rates coupled with low reproductive success means that this species does not recover easily from overfishing, and it’s critically important that bow fishermen distinguish the bigmouth buffalo from the grass carp before they release an arrow! 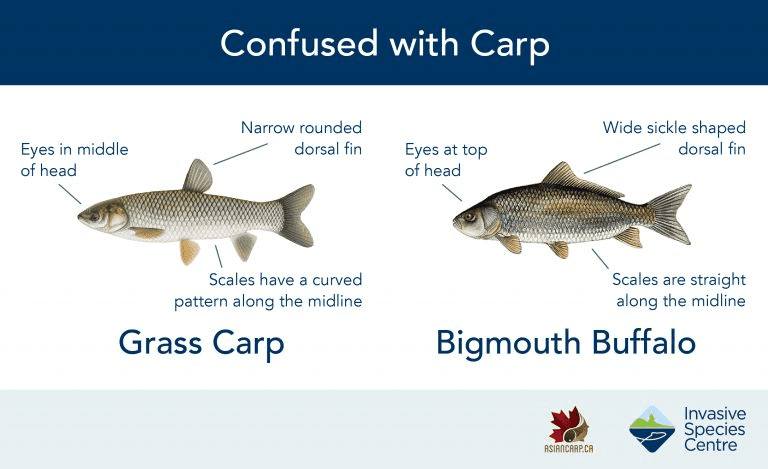 Given that bow fishing can’t be catch-and-release, proper species identification before the shot is of the utmost importance.

Bigmouth buffalo are roughly the same size and shape as the grass carp, but their color, eye position, and fin shapes are quite different.

For bow anglers, the dorsal fin is the dead give-away: if you see a long, curved dorsal fin, don’t release your arrow! 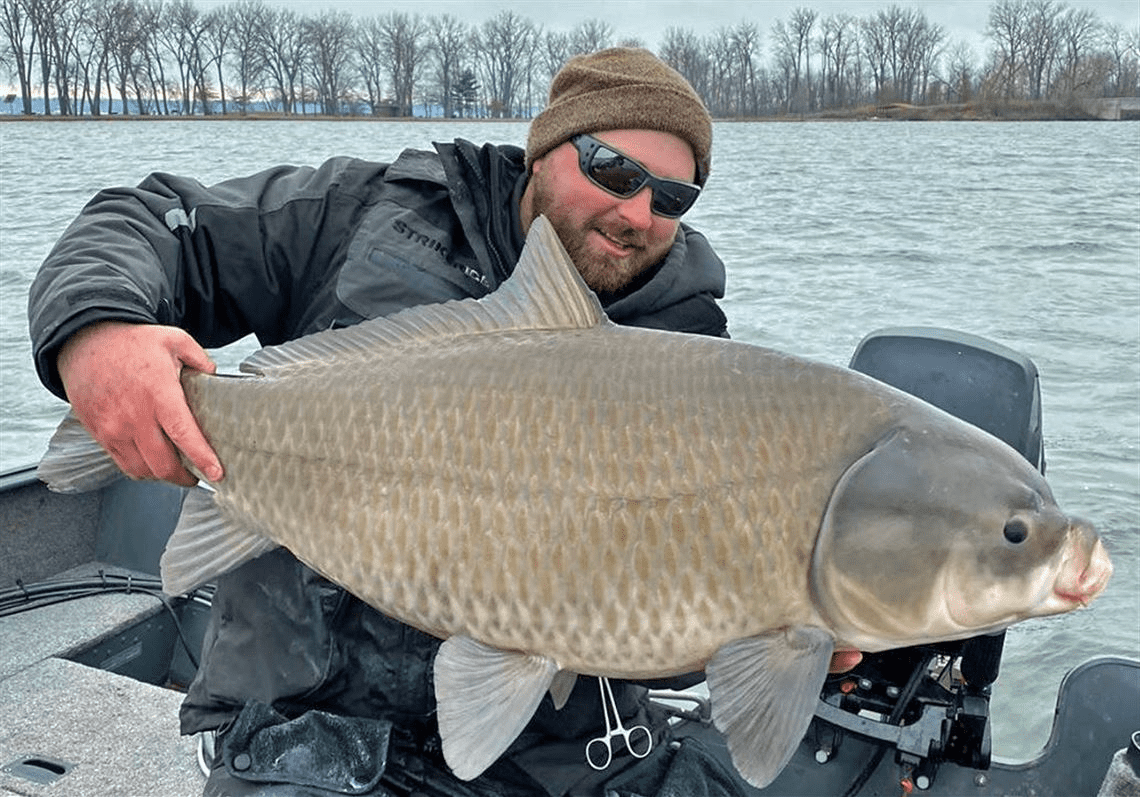 Look for that distinctive dorsal fin, and don’t shoot! 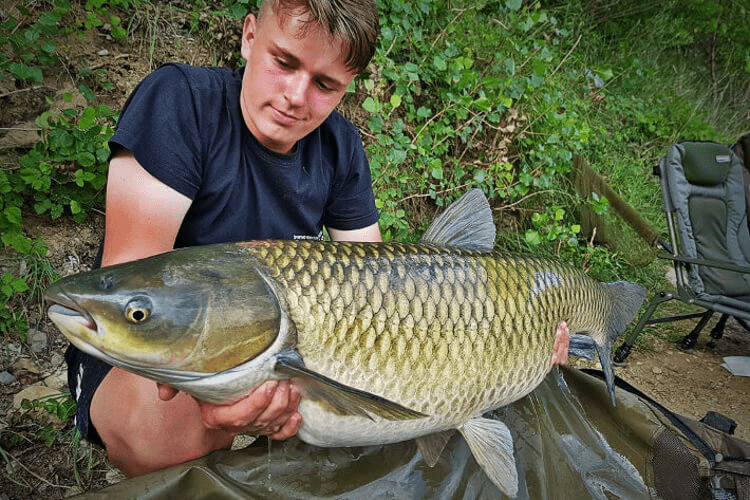 The grass carp, Ctenopharyngodon idella, is native to Asia, and it was first introduced to the waters of the US in the late 60’s. Now used as a solution to excessive aquatic vegetation, the grass carp is a fact of life in many slow-moving rivers and shallow, weed-choked lakes in the US.

While popular as a game fish in Europe, the grass carp is largely despised by anglers in North America - that is, until the advent of bow fishing. Favoring shallow water and frequently cruising or sitting just below the surface, the grass carp is an ideal species to target with bow and arrow.

Grass carp grow rapidly and reproduce prolifically, making them an ideal sport species with little to no concern about overharvesting, especially given their status as an introduced species.

Growing to as long as 6 ½ feet and weighing in at nearly 100 pounds, grass carp get big, making them an exciting target for bow anglers. 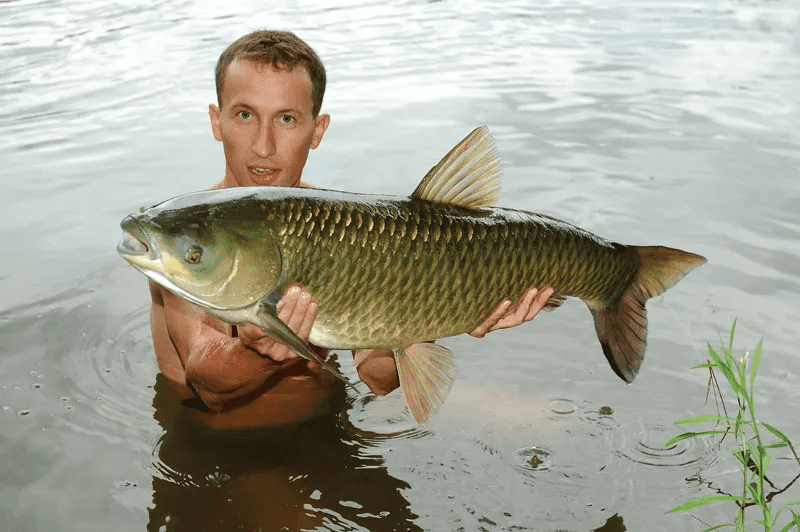 Grass carp share many superficial similarities with the bigmouth buffalo, but a close look can distinguish between them.

For bow anglers, that narrow, rounded dorsal fin is the distinguishing characteristic. 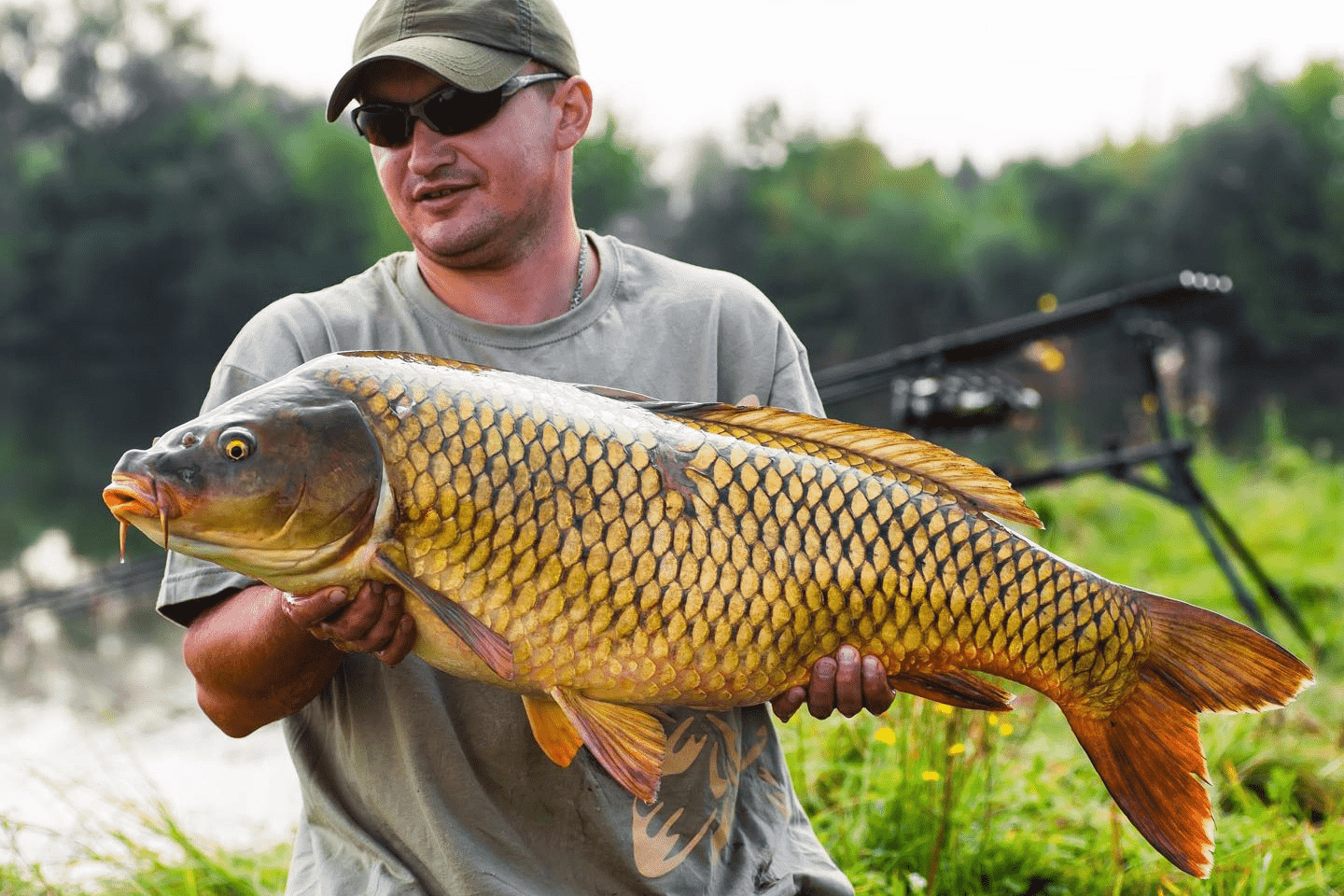 For experienced bow anglers, telling the difference between a grass carp and a bigmouth buffalo is a snap. But the common carp, especially when it’s masked by stained water, looks an awful lot like the bigmouth buffalo.

The common carp is properly called the Eurasian carp, or Cyprinus carpio. Native to the Danube river in Europe, this species has been introduced worldwide and is a common sight in slow-moving or still water in North America.

Primarily feeding on aquatic vegetation, the carp’s diet does include mollusks, invertebrates like crawfish and snails, aquatic worms, and insects. On this sustenance, they typically grow to maximum lengths of about 31 inches, tipping the scales at 30 pounds or so.

The common carp reproduces easily and grows very quickly, and given their tolerance of low oxygen and high turbidity, they can survive conditions many other species can’t.

First introduced into the US in 1831, they’re commonly regarded as pests or trash fish and almost totally ignored by most fishermen. The exception, of course, are bow anglers, who actively target the common carp, especially at night.

This is where things get really tricky for bow anglers.

For bow fishermen, that bright, shiny, vibrant scale color is the easiest cue that they’re aiming at a common carp.

Knowing the difference between bigmouth buffalo and the two most common species of carp is critical for bow fishermen.

Because while the bigmouth’s conservation status is currently clear, that’s probably the result of our relative ignorance about the species rather than careful science. Skewering this slow-growing, slow-reproducing species isn’t good for the species or for the future of the sport.