Can Fish Hear You Talking? The Science Behind Spooking Fish

If there’s one thing I heard as a kid from my dad and grandpa, it was, “don’t make noise while you’re fishing, son!”

I’ll bet you hear the same thing - or have said it yourself!

But it turns out that the fear of spooking fish by talking or making noise is mostly a myth, and some basic science can tell us why.

So if you want to know if fish can hear you as you talk on the bank or in your boat, keep reading!

The Science of Sound

Sound travels in waves - and it travels quickly. In the air, it propagates at 767 mph, fast enough that it seems instantaneous until you’re at a fair distance from the source.

If you've ever seen the pop of a firework only to hear it a second later, you know exactly what I mean.

At a greater distance, the delay can be dramatic:

But sound doesn’t travel through a vacuum: it requires a medium like air, water, or aluminum. And the denser that medium - the more tightly packed its molecules - the faster sound can travel from one to another.

Because water molecules are more densely packed than those in air, sound travels better in water than air. It’s roughly 4.3 times faster in that medium, and it travels greater distances, too.

That seems like a problem; maybe grandpa was right after all!

So let’s say you spill your drink all over yourself, yelling, “Shoot!” as you look down at the sticky mess you’ve made of your shirt.

That’ll spook all the fish nearby, right?

Now, some of that sound will be transmitted to the water below, and that depends on a number of factors that are too complicated to detail precisely or predict accurately.

But as a general rule, that sound wave will deflect pretty much like a flat stone thrown into the water, with the angle it hits the surface making a huge difference in how it behaves. 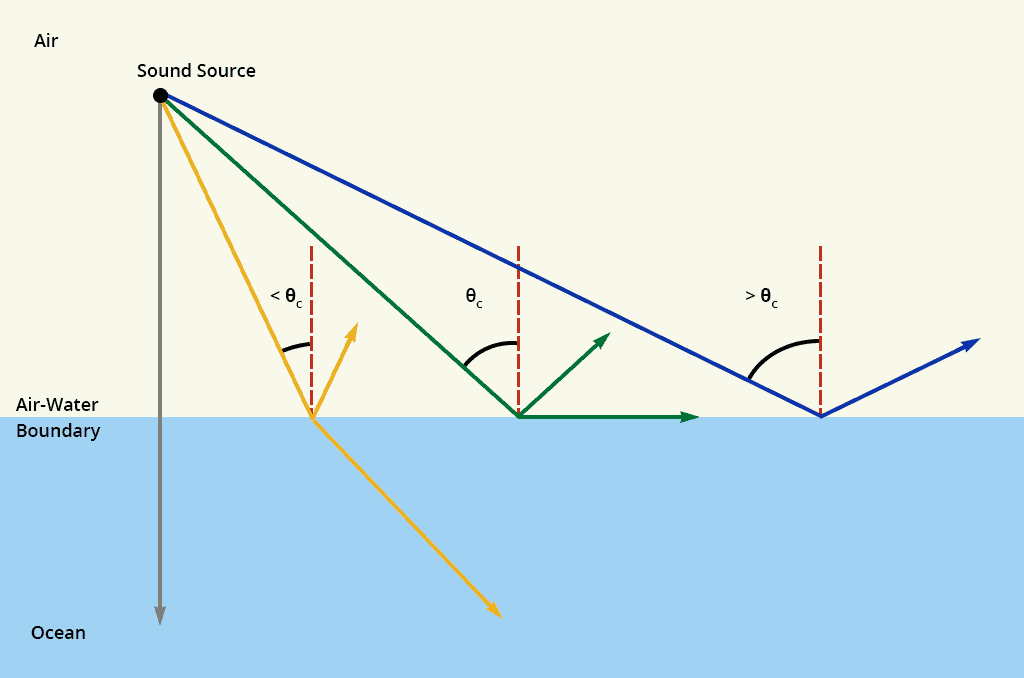 Since the angle of incidence and the angle of reflection are always equal, distance matters. While some of the sound of your “Shoot!” will penetrate the water very near you, as your exclamation gains distance, more and more of it will be deflected.

In the diagram above, the red dashed line is called the “normal line.” As soon as the angle of incidence reaches more than 15°, the sound simply skips off the surface of the water and can’t be heard at all beneath the surface.

For all practical purposes, that means that any sounds you make with your mouth or hands simply don’t enter the water at all.

You can yell at the fish all day, and they won’t hear you!

So far, so good. It turns out that your grandpa was wrong, and that asking him for a snack isn’t going to spook any fish.

But there’s a catch.

If you’re in a boat, your hull is a giant sound transmitter. More dense than air or water, its tightly packed molecules transmit sound much faster than water or air, and they do so over longer distances.

Let’s say you drop a tackle box into the hull of your aluminum boat. Your hull will transmit that sound almost instantly to the water it’s displacing, creating a sound wave that propagates below the surface of the water.

That wave is going to zoom outward, alerting every fish nearby.

That’s also true for any sound you create below the water line, whether that’s a paddle hitting your canoe, an outboard motor roaring to life, or a noisy trolling motor.

Fish will hear any noise that’s transmitted through the hull, from stomping feet to dropped tackle. They’ll also hear any noise you create that originates below the water line.

So there you have it: talking won’t matter at all, but dropping a rod and reel on the deck to grab another one will!

This is especially true if that sound begins with the hull rather than the deck above it, and conventional bass boats are pretty quiet as you move around and switch tackle.

But aluminum V hulls can put you right against the water, so watch your step and keep vibration to a minimum!

Tips to Reduce Spooking Nearby Fish

So we’ve covered the basics, and you know by now that talking, clapping, music, and even yelling won’t spook fish - and more importantly - you know why.

It’s not how loud the noise is, or how much background noise there is underwater (though that can affect things, too), but rather the physics of the air/water boundary.

But you also understand that directly transmitting sound into the water through your hull or by running a motor, can and does spook nearby fish.

So what can you do to avoid this?

This is a big one.

That big outboard you bought to get you to your honey hole in no time was a great investment, but you need to turn it off well before you reach your fishing spot.

If you even need to ask how far, you’re not really getting the physics of sound travel in water.

I’d cut my outboard at least a couple hundred yards from where I’m planning to fish, using my much quieter telling motor to bring me into where I need to be.

And speaking of which, no matter how quiet your telling motor, running that prop full-throttle creates more sound than lower speeds.

Try to keep your throttle as low as you can. Think “stealth,” not “speed.”

If you’re standing directly on your hull, add some outdoor carpeting to provide a cushion. It’ll help dampen any noise you make while dropping tackle, and you will spook fewer fish, guaranteed.

It’s also not a bad idea to pad the gunwales, too, as striking them with a rod is doing you no favors at all.

If you understand the basics of the science of sound, you can immediately know which kinds of noise are a problem and which are nothing to worry about at all.

And with a few precautions, you can avoid spooking fish, tilting the odds in your favor!

We hope you learned something today, and if you did, we’d love to hear from you.