Bowfishing Tips: Six Effective Tips to Help You Shoot the Fish of Your Dreams

The first few times you hit the water as an archer, you can expect frustration.

That’s just the way it is, and unless you’re an unusually seasoned hunter, your first 20, 30, or even 40 shots are going to miss. And that’s if you even see a shootable fish!

But there are ways to shorten this otherwise steep learning curve, and to help, we’ve assembled some of our favorite tips.

Practice snap shooting - and do it on the water

Seasoned professional archers aren’t typically big fans of snap shooting, a technique in which you release prior to full draw and aim instinctively. For them, proper and consistent form is the key to improved accuracy, and in the vast majority of situations, they’re right.

But fast-moving fish often demand snap shooting, and whether you're looking to skewer a fat carp or stick a wily gar, a quick shot can be just the thing - but only if you’ve practiced, practiced, and practiced.

It’s a simple truth that you need to spend hours - hundreds of shots - to develop muscle memory, and actual thousands may be necessary to fine-tune your body’s mind/muscle connection.

But if you want to get good at snap shooting, if you want to rack up numbers that’ll place you in competitive tournaments, you need to be willing to spend the time with your bow that’ll take.

And you need to do that on the water.

We’ve all practiced with targets in the backyard, and that’s a solid way to build a skill base that’ll pay off down the line. But you’ll only really hone your snap shooting skills for fish if you simulate the kinds of shots you’ll actually be taking.

One common tip is to sink soda bottles filled with water. Let them go in different - realistic- depths of water. Then back off to your high-probability distance (start at about 10 feet), and practice your snap shooting.

In contrast to the careful draw you take on a buck, for instance, you’ll need to draw and release in one smooth motion. And that means that bows featuring a let off are not ideal. 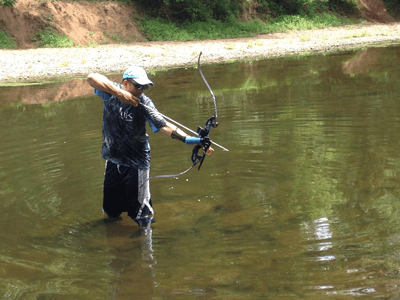 The right kind of bow is necessary for snap shooting.

Instead, recurved and lever-actions are the way to go, explaining their popularity with serious bowfishermen.

A few hours a weekend in the off-season will really up your game, and don’t be surprised if you see some well-respected archers doing just the same thing!

Tune your bow on the water

Our second tip is related to the first. 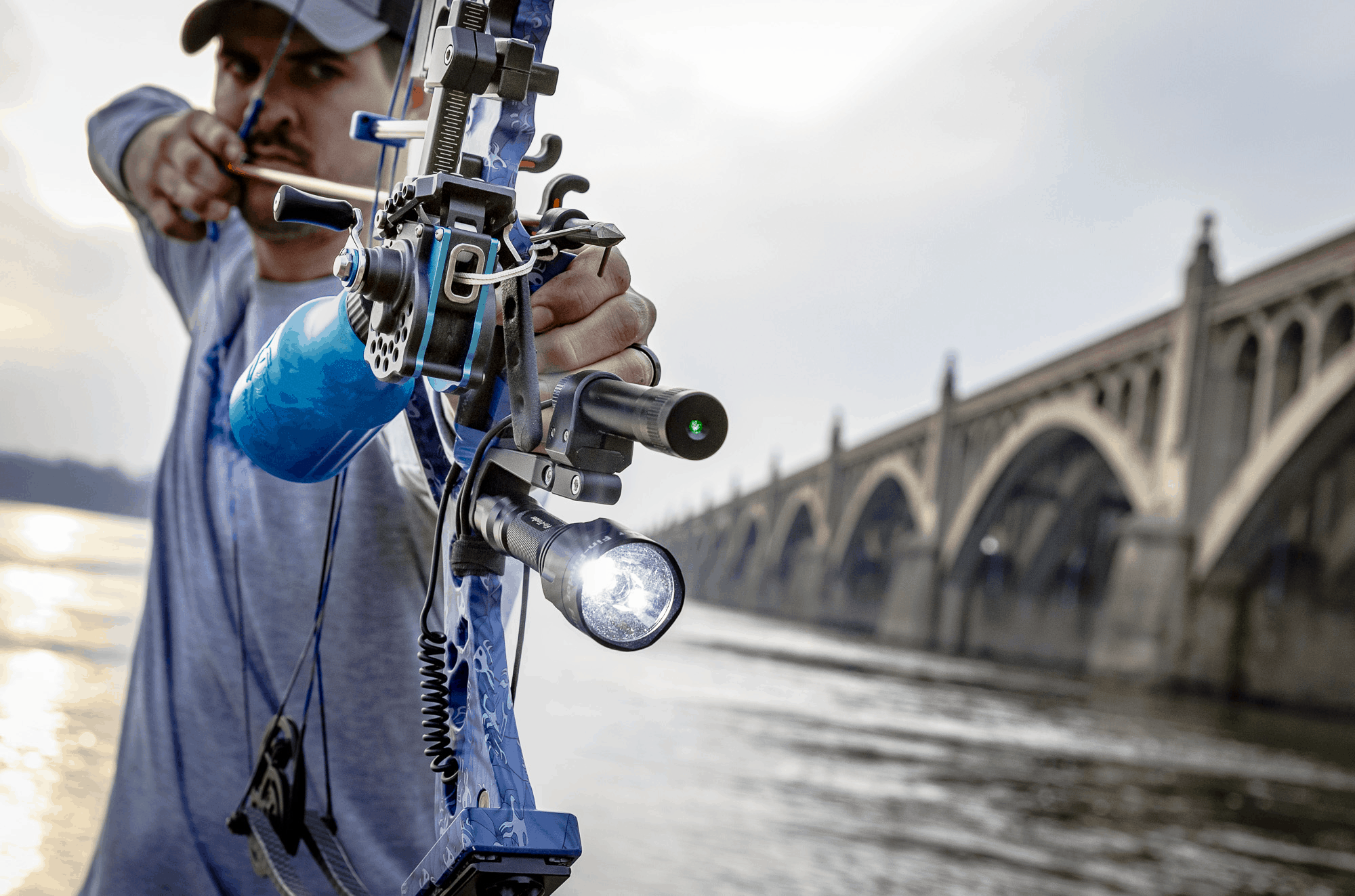 Tuning your bow on the water can make all the difference.

Robin Parks, the internet bowfishing sensation, is a firm believer in the benefits of this practice. “When I get a new bow, one of the first things I do is tune it on the water,” he explains. “Instead of paper tuning it like I would a hunting bow, I use the water as my paper. I shoot at a leaf or something on the water and if my arrow is flying sideways or splashing a lot when it hits the water, I adjust my rest or nocking point until my arrow shoots straight into the water without much splashing. A splash is like a tear in the paper. You want an arrow that flies straight into the water. If it flies sideways and causes a big splash, you lose accuracy and kinetic energy.”

You’ll see a real-world difference right away, with cleaner, more accurate shots and greater energy on every hit.

This tip may sound strange, especially if you’re a seasoned bowhunter who’s been working up to heavy draw weights to punch big bucks, boar, bear, moose, or elk.

When you send an arrow through-and-through your fish, two things happen.

First, you risk punching the mud or clay bottom and potentially clogging your levering barbs. Not every archer uses this style point (more on this in a moment), so this may not be an issue for you.

But second, you give yourself more work to do when removing your arrow. And in a tournament, time is money.

Unless you’re shooting a point in which you twist the tip to release the barbs, you don’t need or really want full penetration. Unlike big game, you’re not looking for a long wound channel to increase blood flow - you just want your point deep enough to allow the barbs to grab.

Your shot isn’t going to kill that fish in any case, right?

So a deep point is more than good enough, and when it’s time to remove it, you won’t have to fight through as much flesh.

That means every arrow can come free just that much faster, allowing you to shoot again that much sooner. 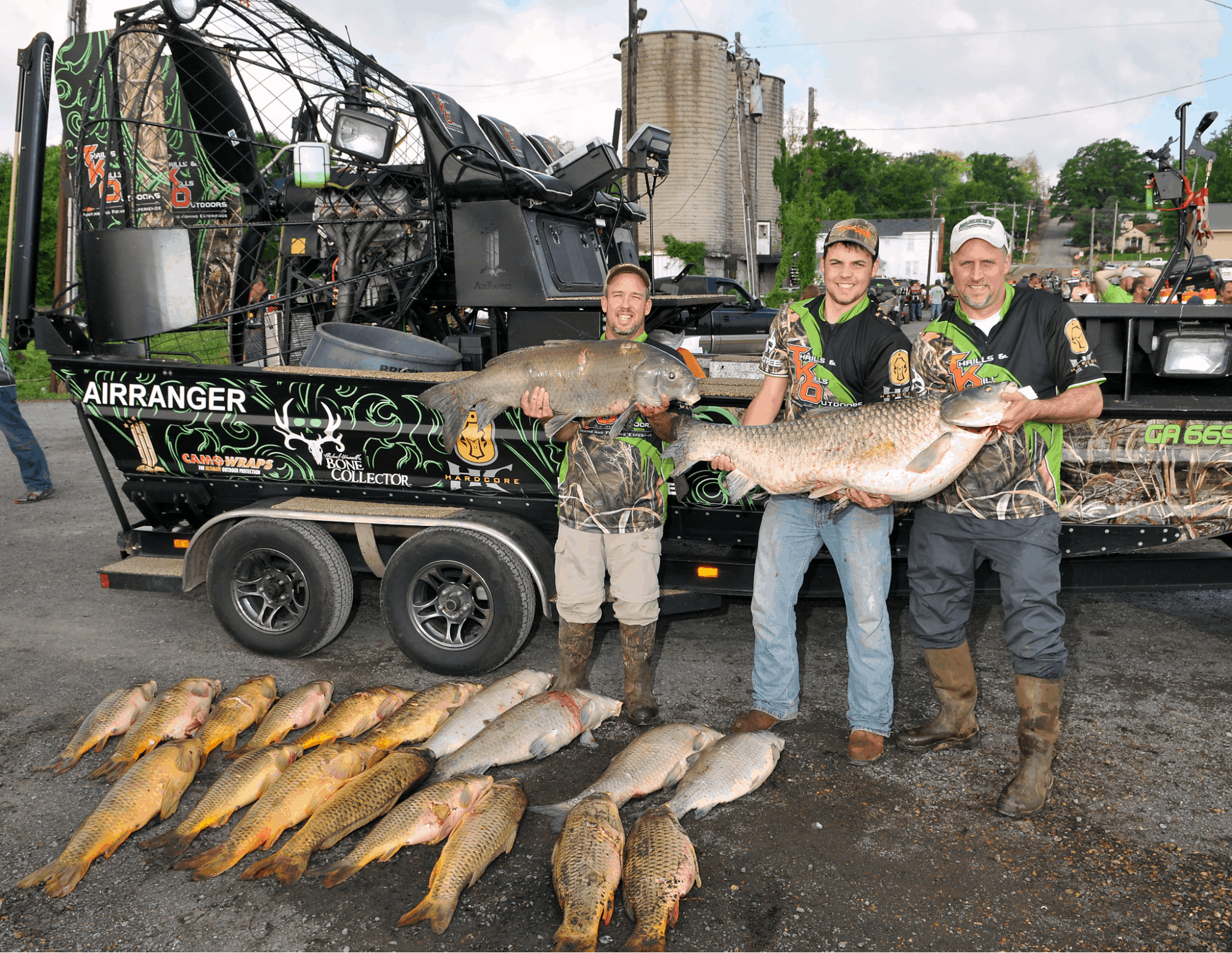 If you want to keep up with these guys, reducing your draw weight might do the trick.

And when a tournament is won or lost on one fish, getting back in the action quickly is a champion’s secret.

If you find you’re running your points out the far side of your fish, consider dropping your draw weight by 10 to 15 pounds.

Assess and time your removals, and see if you don’t get back to shooting faster.

Replace your tips and chose your points carefully

Sharp tips are a must, and the moment you see them taking damage, you should either clean them up with a file and sandpaper or screw on a new one.

Dull tips are a deal-breaker: they’ll ruin your next hunt, guaranteed.

And right along with that, you need to be shooting a point that’s matched to your draw weight and quarry. We’ve covered our favorite points before, and you should take a look at our article on the the best bowfishing tips.

Most points are designed for either thin-skinned or tough-skinned fish, essentially falling into two broad categories: “carp” and “gar.” A few, like some of the points from AMS, work well on both, but the vast majority of points fall to one side or the other of this divide.

You’ll also want to match the barb style to your draw weight. Exposed barbs, and more of them, create drag as they pass through the water and your fish, and lower draw weights can really struggle to provide enough power when the water, the scales, and the flesh are working against them.

I like a powerful bow to drive exposed barbs deep.

For draw weights of less than 50 pounds, I really like folding barbs as they lay more or less flat against the point during penetration, only creating significant resistance once they’ve been deployed. 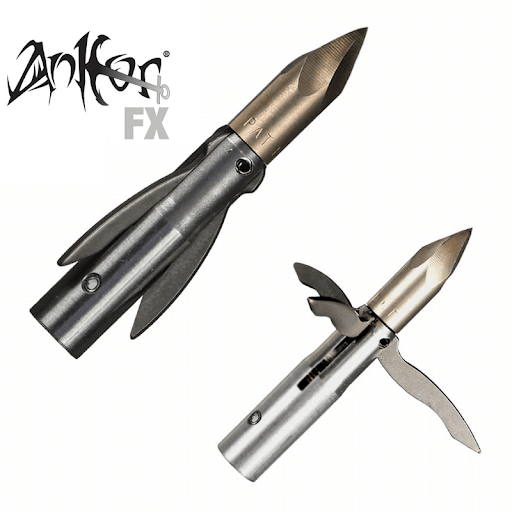 AMS makes the Ankor QT, a point that’s good on all species and ideal for low draw-weights.

Now, keep in mind that folding barbs have weaknesses, too, like the chance to plug them with mud or clay.

A final thing to consider is the manner of release. Once you’ve stuck your fish and got it on dry land, you’ll need to remove your arrow. Some points release their barbs by twisting the tip; others accomplish this with a twist of the shaft.

Generally, the latter is the easier system to work with, but your mileage may vary.

Ultimately, you know your conditions, your skill, and your bow: make the right choice for yourself!

Any serious angler will tell you that scouting and marking likely places to find fish are the keys to success.

That’s just as true for archers as it is for fishermen.

Whether you fish from shore or run a boat, take the time to scout for the best spots. That means you’ll want to consult topo maps and look for places likely to hold the fish you’re chasing, use a GPS to mark spots you’ve found fish, and generally plan where and when to meet up with the gar or carp of your dreams.

The logic is simple.

Prey attracts predators - and even carp feed on fish eggs, snails, and other invertebrates, so don’t ignore that fact. You need to locate these feeding areas and then find the ones that allow big fish to hunt and run.

For that, you’re looking for a steep drop-off into deeper water.

That can be a narrow point with weeds along the sides, a shallow shelf near a channel, or nearly any other combination of shallow, deep, and steep - and that includes humps and submerged islands, so good electronics are a must.

If you find these spots, you’ll find the fish!

Our final tip is all about vision. With good polarized sunglasses, you’ll be able to see through the water and glare, spotting fish more quickly and getting a better aim overall.

And while we’re as price-conscious as anyone, really cheap polarized lenses probably won’t cut it. That’s because really inexpensive offerings just won’t offer quality coatings, and the polarizing effect won’t cut surface glare like it should. 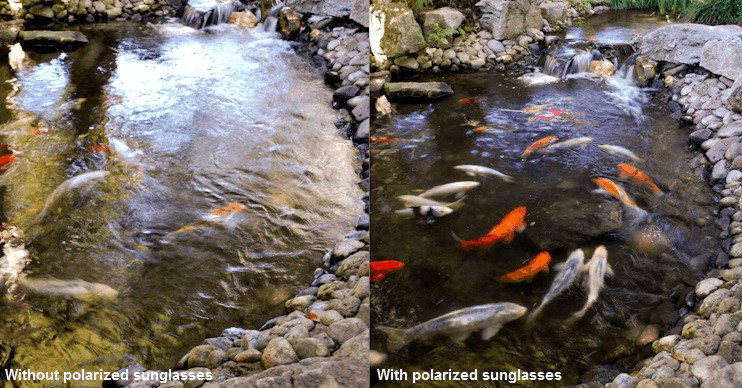 That doesn’t mean you need to spend an arm and a leg to get a good pair, but you do need to know what you’re looking for to get the most for your hard-earned money.

We’ve reviewed some of our favorites before, and if you want the run-down on the best polarized sunglasses, check out this article.