Here, we’ve assembled an in-depth guide to the best smallmouth bass lures that will help get you dialed in and make your 2023 season a successful one.

Whether you’re a seasoned professional or a casual weekender - or you fall somewhere in between - versatility is a big part of a successful day on the water. Having a variety of lures on hand is important no matter what you might be fishing for, but with a smallmouth bass’ willingness to eat anything, and their ability to ignore seemingly everything, versatility can truly make or break your day.

Quick glance at the best lures for smallmouth bass:

Soft plastics are one of the most versatile lures on this list. Fishing them fast or slow, shallow or deep, will all depend on the way they are rigged, but whatever the situation calls for, smallmouth will gobble them up like they’re candy.

For finesse fishing smallmouth bass, it’s hard to beat a drop shot rig. A drop shot rig may seem intimidating at first, but at its core, it’s quite simple. Consisting of a hook tied above a weight, a drop shot rig allows soft plastics to move subtly and freely through the water while keeping it in the strike zone and away from nasty snags, requiring little to no action imparted from the angler. A slow, methodical technique that lets the lure do the work, enticing finicky smallmouth.

Here are some key points to keep in mind when considering fishing soft plastics for smallmouth:

While it is possible to fish just about any soft plastic on a drop shot rig, there are some that simply outshine others.

The Strike King Dream Shot is a shad-style bait designed with drop-shotting in mind. Its super soft construction and hinged tail mean it moves freely in the water, dancing around at even the slightest movement. Ultra lifelike in both action and feel, smallmouth will latch on and not let go. 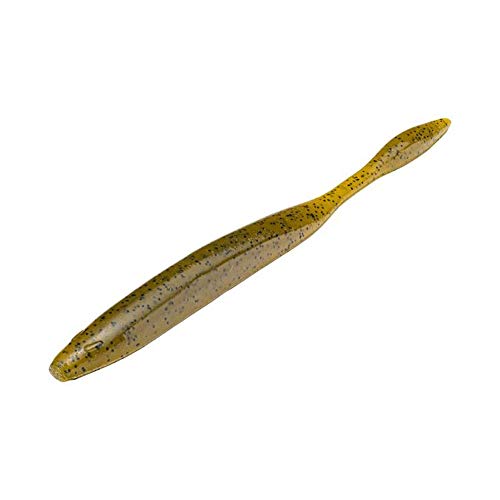 Another finesse plastic favorite is the Yamamato Senko. This worm-style plastic has been around for a long time and is a staple in many smallmouth anglers’ arsenals for good reason. Rigged wacky style, whether on a drop shot rig or a weightless hook, the Senko is another plastic whose free motion makes it hard for smallmouth to resist. 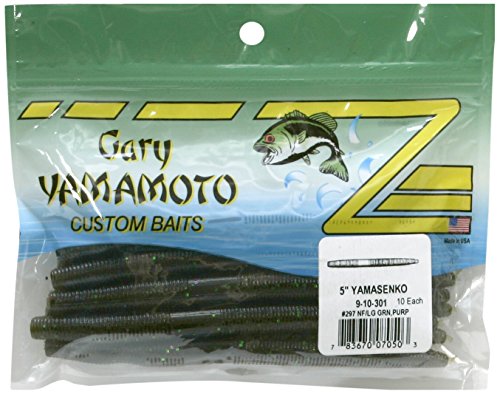 If you’re looking for a plastic that can be fished hard and cover a lot of water, then the Berkley PowerBait Power Swimmer is an excellent choice. Available in sizes ranging from 2 inches up to 4.3 inches, there are plenty of options to match a smallmouth's mood. Rigged on a weighted hook or a jighead, a simple cast and retrieve is all this bait needs. The ribbed body adds extra vibration to the already enticing paddle tail to create savage strikes from angry smallmouth. 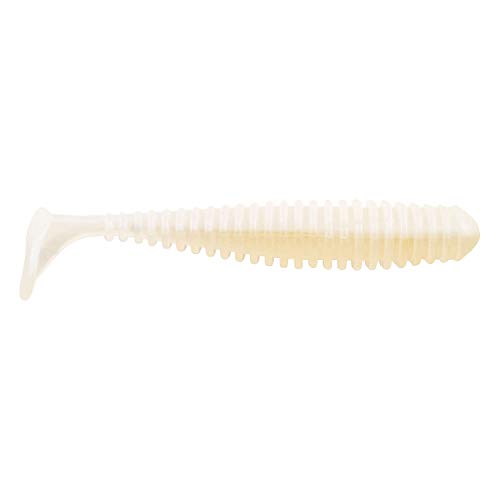 You may be thinking, aren’t tubes soft plastics? Yes, they are, but tubes work so good that we think they deserve a category all to themselves. If your tackle bag is only going to see one of the lures on this list, make it a tube. Rarely are there times where a tube won’t catch smallmouth, whether you’re fishing a big river, a small stream, or a lake, tubes just work.

A tube can be rigged several ways, but there is none better than what they were designed for; sliding a weighted jig head in their hollow bodies. When fished slowly on or near the bottom, a tube jig rigged this way will imitate a crawfish, with the skirt slightly moving around when the jig is stationary. When fished fast, the erratic motion will trigger hard reaction strikes from cruising smallmouth.

The selection of tubes available can be overwhelming, and tackle shops often have sections dedicated to them and only them. With seemingly endless sizes and colors, the right choice may not seem like an easy one. The truth is, you can’t go wrong with any tube. When selecting the right tube, remember a few key things:

A favorite for us is the Strike King Coffee Tube. The infused coffee bean granules and coffee bean oil not only give the tubes a natural tone but also offer a scent that smallmouth can not resist. As an added bonus, coffee also helps to mask human scent. The tube is also salt impregnated, making it impossible to resist.

Crankbaits are another lure that every smallmouth angler will have at least a handful of. It’s no secret that they can produce big fish, and lots of them. Crankbaits are considered a power fishing lure, used to search out aggressive pods of fish and cover lots of water in a short amount of time. One of the better ways to fish deeper water (from 6ft down to 30ft), crankbaits shine when smallmouth are aggressive, and banging them off the rock bottom will elicit heart-stopping strikes.

When fishing an area where smallmouth are actively feeding on crawfish, you can’t go wrong with a Rebel Crawfish. Its lifelike appearance and erratic, pulsating action do a great job of imitating what is often a Smallmouth’s favorite meal. There's a good reason why this lure has been a favorite for many smallmouth anglers over the years.

Another great crankbait option is Rapala’s DT Series. These crankbaits are some of the fastest diving on the market. Not only do they dive quickly, but the use of perfectly balanced internal weights also keeps the lure in the strike zone longer. DT stands for “dives to,” with each number in the series representing the depth that the lure is designed to dive to, making choosing the right one for the depth of water you are fishing simple.

Jerkbaits are a little more of a niche lure when it comes to fishing smallmouth and are typically used when fish are feeding near the surface and are keying in on bait fish like alewives, smelt, or ciscos. While the time may not always be right to fish a jerk bait, they are without a doubt one of the most exciting ways to catch smallmouth, as strikes can be savage.

Rapala’s X-Rap is a hard lure to beat when it comes to jerkbaits. The action on these lures is aggressive and hard-hitting, but its ability to stop on a dime and suspend make it easy to work slowly and methodically, too - a key feature as smallmouth will often attack while the lure is stationary. The XR10 is a standard size when it comes to smallmouth, but that doesn’t mean that the larger XR12 and smaller XR8 don’t have their time and place.

An often overlooked jerkbait is the Smithwick Suspending Rattln’ Rogue. While not the most common jerkbait found in a smallmouth angler’s tackle bag, there is no denying its ability to boat big feisty smallmouth. The loud internal rattles call out to fish in all directions, and its neutral buoyancy suspends the lure perfectly in the water column allowing smallmouth to get a good long look before attacking.

With the exception of tubes, jigs are possibly the most popular lure when it comes to smallmouth bass. The lures on this list are all known for doing specific things in different situations, but the jigs’ claim to fame is a little different. Jigs are known to produce big fish. If it’s trophy smallmouth bass that you’re after, then jigs are a must.

With two main styles of jigs, the rubber skirted jig and the hair jig, there really is no time of year, or specific fishing situation where they can’t work. Rubber skirted jigs can be fished fast or slow, in any type of water, banging against rock or other structure smallmouth may be relating to, ringing the dinner bell and calling out an easy meal.

Hair jigs can not only be fished the same as their rubber skirted counterparts, but smaller, more finesse jigs can also be fished under a slip float for those days when suspended fish don’t feel like chasing down their meal.

Options can be seemingly limitless when it comes to jig fishing smallmouth, but if you’re just starting out and are looking for one that can cover all kinds of scenarios, then we suggest starting with a ‘flipping’ or ‘casting’ jig as they are commonly known. It’s hard to go wrong with a Booyah Boo Jig as your all-around Smallmouth jig. Available in a number of different sizes and colors, these jigs can cover just about any scenario. The jig’s magnum rattle and ultra-fluid rubber skirt make it the ultimate fish catcher any time of the year. 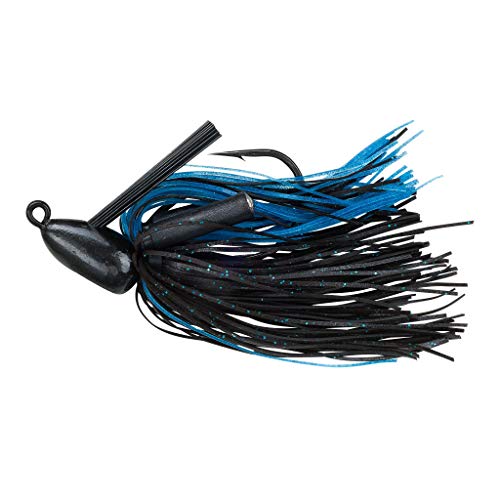 As far as hair jigs are concerned, one that shouldn’t be overlooked isn’t made from hair at all. Despite being in the same category, it’s actually constructed out of marabou turkey feather. The VMC Dominator Marabou Jig uses the perfect combination of marabou and flashabou to create lifelike movements that drive smallmouth bass crazy. The ¼-ounce version is perfect for casting or pitching into cover, while the smaller 1/16-ounce jig can be fished under a slip float on those days when smallmouth are a little harder to persuade. 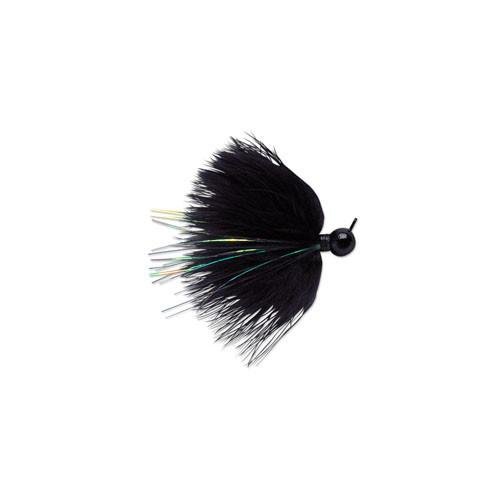 It would be impossible to pick the “ultimate” lure for smallmouth bass. Each situation requires different approaches in order to be successful. Sure, there are other lures or bait to catch smallmouth, but most would agree that a well-prepared tackle bag should contain the lures we’ve discussed here.

Whether you’re just starting out or you’ve been fishing smallmouth for a while, we hope this article has helped put a few new lures in your bag. Please leave a comment below and let us know if it has!

About The Author
Dan R
Dan was practically born with a fishing rod in his hand. Growing up in the Great Lakes Region fishing has been a major part of his life from a very young age. When not on the water you can find Dan enjoying time with his family.
Comments
Subscribe
1 Comment
Newest
Oldest Most Voted
Inline Feedbacks
View all comments
Andy Meeker

I’m a weekender. Enjoyed the article and will definitely look into using some of these lures on my next fishing trip.

0
Reply
USAngler.com is a participant in the Amazon Services LLC Associates Program, an affiliate advertising program designed to provide a means for sites to earn advertising fees by advertising and linking to Amazon.com. Additionally, USAngler.com participates in various other affiliate programs, and we sometimes get a commission through purchases made through our links.
SUBSCRIBE TO OUR MONTHLY NEWSLETTER
Copyright © USANGLER LLC
wpDiscuz
1
0
Would love your thoughts, please comment.x
()
x
| Reply