How to Hook a Monster: Best Lures for Northern Pike Explained and Reviewed

Northern pike are ferocious predators. Known to science as Esox lucius, these powerful, sleek hunters haunt the dreams of many anglers, and they’re prized for their legendary aggressiveness, powerful fights, and acrobatic leaps.

We’ve offered our best tips and favorite techniques to catch more pike before. But now it’s time to take an in-depth look at the best lures to snag these monsters.

We’ll explain why we make the recommendations we do and review a list of our go-to pike lures. Keep reading!

Heres a quick glance at the best northern pike fishing lures and baits:

Pike aren’t picky eaters, but that doesn’t mean all lures are equally attractive to them!

Storm is legendary for its hyper-realistic soft baits, and the Live Pike is no exception. Taking advantage of the fact that pike are cannibalistic, it offers them a tempting meal. Available in 4, 5, and 6 inch lengths, all three are excellent choices.

The tail of this lure wriggles as it’s worked, creating a vibration that’s as life-like as it looks. And of course, even the sharpest-eyed pike will find this guy hard to differentiate from the real thing. As a result, northerns hit this lure hard, often swallowing it whole.

Featuring a large dorsal hook and a ventral treble, you can count on a solid hookset.

Zoom’s Super Flukes are a proven choice for pike, and from their salty taste to their delicate flukes, they offer a winning combination of action, appearance, vibration, and flavor.

When rigged on a quality hook like a Gamakatsu #1, you can work these soft baits like a small pike, perch, or shad, even rigging them weedless to penetrate deep cover. And since that’s where you’ll find pike waiting to ambush prey, it’s not hard to imagine what happens next.

That’s something that sets “plain” soft baits apart from their competitors, and they get a lot of love as a result! They’re available in a rainbow of colors, and for pike, everything from Bubblegum to Watermelon Seed is a charm.

As we’ve explained, pike are avid feeders, and pretty much anything is on the menu. Lizards, frogs, and snakes are regular meals, and the Magnum Lizard is a great way to get a really big pike interested.

Fully 8 inches of wriggling, vibrating, salty goodness, this Zoom soft bait is nothing but vibration and action. When rigged weedless and pulled across the tops of weeds, along the sides, or through tall grass, you’ll know if a bruiser is waiting in ambush.

Legendary among bass anglers, the Magnum Lizard should find a place in your tackle box when you’re casting for pike.

A big spinner with a colorful skirt, a curly tail, and a huge blade is just the recipe for maximum vibration, and with a sensitive lateral line, pike just can’t resist. This makes spinners one of the most effective baits to catch these brutes, and Big Tooth’s Straight-Wire is among the best.

Both the Slump Buster and Green Lantern colors are good choices, and there’s so much vibration and action to these spinners that pike will respond from pure instinct. When they do, the Straight-Wire’s double hook design is going to lock them to your line.

Whether you go for a steady retrieve, or let this spinner flutter and drop, it’s simply outstanding for attracting northerns.

Classic in-line spinners like the Mepps Aglia, especially when dressed with a skirt and tail, are amazingly productive when angling for pike.

Especially in large sizes like ½ ounce, these are great choices to buzz in the shallows. That large blade creates a distinctive vibration and flash, and the skirt, tail, and body provide color and action.

Mepps spinners are tough, too, and I find that the central wire can really take a beating without getting bent. 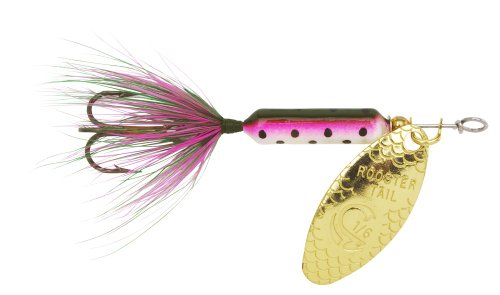 Last, but most certainly not least among the spinners, we recommend the awesome Worden’s Original. In its 1 ounce size, this is a big in-line lure, and like the Mepps, offers plenty for pike.

From a flashing, vibrating blade to a colorful body and skirt, this is a tough lure to beat. I like the Rainbow color a lot, as I think it mimics a small pike, again playing on their ferocious cannibalism.

Pike are suckers for vibration, and nothing beats a rattling lure for that. The Rattlin’ Rapala is an impressive version of the lipless crankbait that uses an internal rattle to call pike from the weeds.

I like the silver/gold, and as you can see, it looks like a shiny prey item, offering the flash, color, and appearance necessary to fool a pike’s outstanding vision. And with two big treble hooks, one mounted ventrally, the other trailing, you’re going to get a solid hookset.

Unsurprisingly, I like to run these down weed beds, especially when they’re near a drop-off. Aggressive pike will often swallow a lure ¾ ounce, 3 ⅛ inch lure, so be sure to run a tough leader.

There’s no discussing rattlers without including the awesome Rat-L-Trap. These ½ ounce lipless crankbaits run 3 inches long, but the vibration they create imitates a much larger fish.

Offered in a variety of colors, I’d recommend something life-like like Yellow Perch. Equipped with a pair of big #2 Gamakatsu treble hooks, the original Rat-L-Trap won’t let you down.

I like to run these pretty fast in summer, burning them through the water to make that rattle sing. Big, nasty pike will rush out to hit them, so hold on!

If you’re looking for big pike--and who isn’t?--you should try the 5 ½ inch Rapala Super Shad Rap.

This Rap has several things going for it. First, whether you throw Perch or another of the realistic designs, it’s got what it takes to fool a pike’s eyes. Second, it has unbeatable action, as generations of pike and muskie anglers can attest. As you retrieve or rip it, it waggles like an injured fish, sending vibrations to the lateral line of waiting pike.

It’s simply money when worked by someone who knows what they’re doing.

This big lure runs between five and nine feet deep, and whether you crank it consistently, let it float a bit between cranks, or rip it from the surface every now and then, pike will devour it.

Tried and true describes the Dardevle when fished for pike. These top-notch spoons flutter like no other, wagging their tail to create vibration and flash.

Whether you throw the 1 or 2 ounce, I recommend you go big, and damn near any color seems to work a trick on hungry pike. These spoons cast as well as you’d expect, and from fluttering descents to steady retrieves, I don’t go pike fishing without a few with me.

What To Consider When Selecting The Best Lure for Northern Pike

Northern pike are dedicated ambush predators, and their speckled green bodies blend perfectly with aquatic weeds and grasses, giving them plenty of camouflage. Nearly invisible as they sit motionless in cover, using almost imperceptible motions of their fins to stay in place, they wait for prey to get close before exploding to full speed in an instant.

Pike eat almost anything, including other pike, and if they can swallow it, they’ll try it. That means that fish of all kinds, frogs and other amphibians, snakes, birds, bats, mice, and pretty much anything else you’ll find in or on the water are fair game.

This is an important fact to understand: where you find vegetation and prey of any kind, you’ll find pike. They’re not choosy, and when the water gets warm in late spring, the pike fishing gets hot. As Greg Keefer explains, “Most pike begin feeding heavily when the water temperatures reach the 55- to 60-degree range and go into the spring feeding frenzy when it climbs to 65 degrees.”

Pike are well-equipped for ambush predation.

Their large eyes provide excellent depth perception and low-light vision. They use this to their advantage: they feed at dawn and dusk when they enjoy a competitive advantage over their prey, and the 90 minutes surrounding sunup and sundown are probably the best times to look for a bite.

Pike also have a sensitive lateral line, which they use to detect the vibrations caused by injured or approaching prey. They’re acutely aware of the location of wriggling fish, and any lure that creates a buzz, flutter, flash, or rattle can get them excited.

The average pike sports hundreds of razor-sharp teeth. These provide an almost foolproof grip on anything they can get into their mouths, but they also simply destroy fishing line.

It’s essential that you use a leader with your lures. Do not rely on abrasion resistant main line to stand up to pike!

One option is to run very heavy fluorocarbon, like Berkley’s 100-pound pike leaders. They’re probably thick enough to take a tooth or two, but I generally prefer metal for pike. 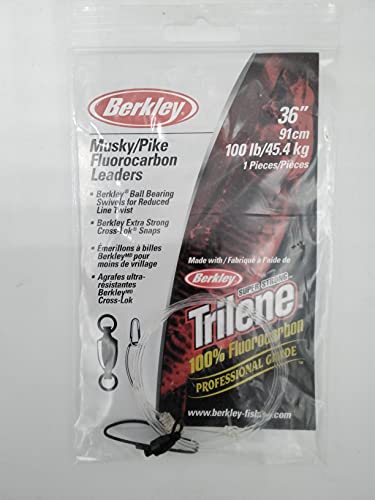 There are plenty of excellent options, including Rio’s tapered leader, which is a single strand of knotable wire coated in nylon. 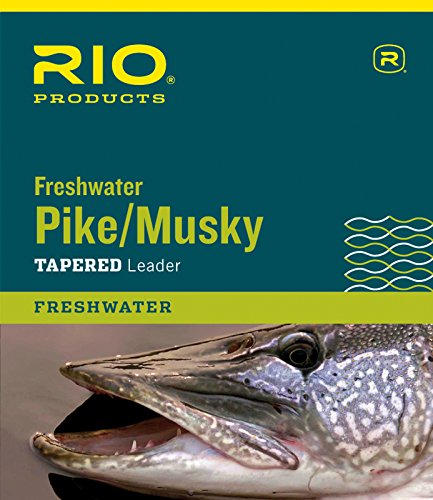 If you prefer to tie your own, I like the Terminator Titanium knottable wire. It’s easy to use, and if you find a pike that can tear through titanium...well...I suggest you stay away from the water! 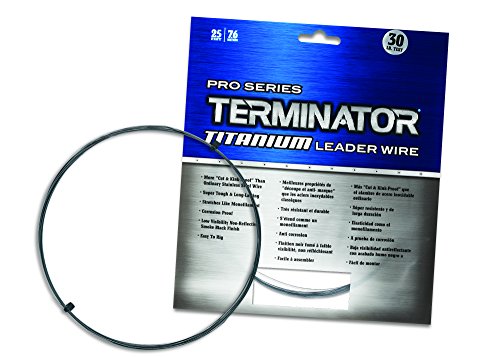 If you want to learn how to tie your own leaders, Ryan DeChaine from Wired2Fish offers clear instructions:

Pike are superb ambush predators, and it’s worth taking a moment to assess what this means for you as an angler.

Each of these outstanding lures deserves a spot in your tackle box, and if there’s one you haven’t tried, you really should! From soft baits to spoons, they’re all pike magnets when fished properly.

Is there a favorite pike lure of yours that we’ve missed? Let us know--we’d love to hear from you!

About The Author
Pete D
Born and raised in Cleveland, Ohio, Pete grew up fishing on the Great Lakes. When he’s not out on the water, you can find him reading his favorite books, and spending time with his family.
Comments
Subscribe
1 Comment
Newest
Oldest Most Voted
Inline Feedbacks
View all comments
gauge tenborg

i never knew they ate birds that could be some help some day.

1
Reply
USAngler.com is a participant in the Amazon Services LLC Associates Program, an affiliate advertising program designed to provide a means for sites to earn advertising fees by advertising and linking to Amazon.com. Additionally, USAngler.com participates in various other affiliate programs, and we sometimes get a commission through purchases made through our links.
SUBSCRIBE TO OUR MONTHLY NEWSLETTER
Copyright © USANGLER LLC
wpDiscuz
1
0
Would love your thoughts, please comment.x
()
x
| Reply