Talk to professional bass anglers, and they’ll tell you that tournaments are won (or lost) through time management.

That’s one reason that tournament winners are willing to invest in bigger motors, more powerful electronics, and faster boats.

Anything that saves time gives you those seconds and minutes back to catch fish. And whether that time is won by getting to the hot spots more quickly or finding fish faster, the result is more prize money.

It’s clear, then, why culling systems are a critical component of a tournament-ready system. While essential to the tournament process, they can be slow, frustrating, and inefficient.

While not as exciting as lures or outboards, fishfinders, or trolling motors, the components of a culling system that works for you can be the difference between placing and going home empty-handed.

To get a handle on the right culling system for you, let’s break down the steps to see what components are necessary.

These are our steps in the culling process, and each is a point where time can be won or lost:

Assess - Whether you prefer to weigh or measure your fish, you’ll need an option that’s easy to use, accurate, and fast.

Record - If you’ve ever skipped this step, you know why you shouldn’t! It’s absolutely critical that you have an accurate, up-to-the-minute record of your weights or lengths of your best fish - no guessing, no approximating.

Mark - You need a fast, unmistakable way to mark your best fish, preferably in a way that ranks them at a glance.

Cull - And finally, the moment of truth. You want to quickly compare a new catch against your best fish, and with minimal time and hassle, figure out which one’s the keeper.

A good culling system makes each of these four steps as simple, fast, and accurate as possible.

The first place that the perfect culling system for you will win time is assessment.

Some anglers prefer a digital scale, while others trust a ruler. Both have their strengths and weaknesses.

Scales are great in that they give you an accurate weight - the only thing that really matters at the end of the day.

But they have multiple points of potential failure.

That’s why - for me - simple and reliable is better. My favorite scale is the rock-solid Accu Cull. It comes with an awesome mini grip, and it just works, and works, and works. 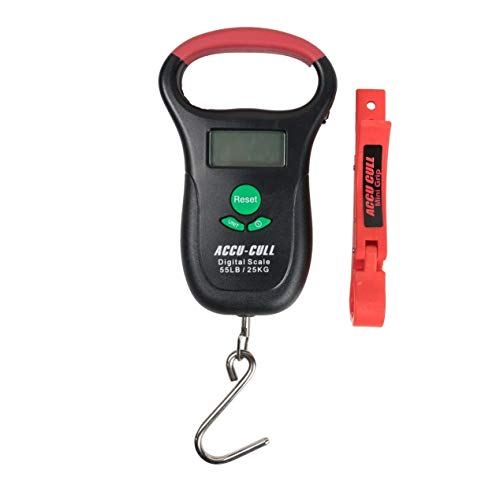 Simplicity and durability are what the Accu Cull delivers in spades.

The Accu Cull features a bright, easy-to-read, backlit screen. It shuts down automatically after 50 seconds, but no worries--until you clear it (using the reset button after powering down), the last weight stays put! Anglers have found it plenty accurate, and it weighs up to a maximum of 55 pounds, in either one ounce or 100th of a pound increments. It also comes with a retractable 38-inch tape measure, just in case.

But it’s not designed for tournaments, so there aren’t any complicated memory features to help you keep track of your best fish.

For that, you’ll want to reach for Rapala’s Touch Screen Tourney Scale. 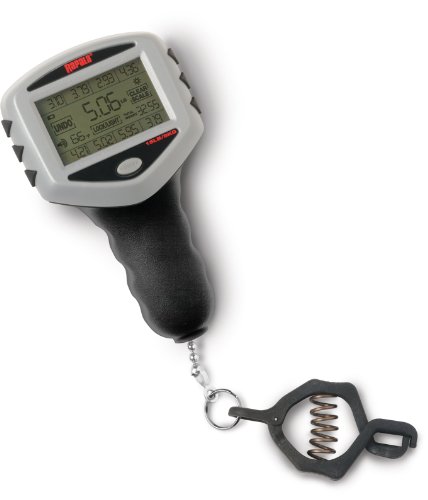 There’s a lot to like about this Rapala scale. Built with bass tournaments in mind, its large backlit screen presents eight stored weights plus a running total. That’s critical information when the heat is on and a feature we’re sure you’ll appreciate. And with a 15-pound maximum (it’s also available in a 30-pound model), measuring one-ounce increments as well as 100ths of a pound, you’re covered for even the largest bass.

But that complexity comes at the price of durability.

It’s not terribly water-resistant, and you’ll want to keep this scale dry. It can also have problems with fogging in high humidity conditions.

That said, the Rapala Touch Screen Tourney Scale is a fixture on the water when money’s on the line.

Anglers who prefer bump boards are looking for bomb-proof durability and rugged simplicity, and there’s certainly an argument to be made in favor of rulers. But there’s a BIG problem that I’ll discuss in a second.

Longer fish are almost always heavier than their shorter kin, and a metal ruler (never plastic) can help you separate the fish you should keep.

Quality aluminum bump boards are pretty much all of a kind, featuring indelible, easy-to-read numbers.

Frabill’s bump board is my favorite because they've chosen a contrasting black color for their lines and numbers. That makes it easy to read, saving time.

If you decide that a ruler is right for you, don’t forget that you’ll need a culling beam, which we’ll discuss in the final step, below.

Now for the problem.

If you opt for a ruler over a scale, you’ll complicate recording.

While there are products designed to speed and simplify the recording process for weights, similar systems aren’t available for lengths.

Simply put, your best bet is a digital scale.

Some anglers like to use a notebook or smartphone to record their numbers.

The idea is to have a record that matches your marking system, making selecting the right fish to cull a no-brainer - since mistakes can cost you serious money!

But I want you to think this through with me.

Would you rather turn from assessment to recording, writing down your fish weights or lengths with some system to connect that to markers, and then mark your new catch?

Or would you rather just turn an easy-to-read dial next to a color that matches your markers?

Yeah, I thought so.

The advantages of digital scales over rulers is pretty clear, and given some awesome products, it’s a decisive advantage to work with weights.

Designed to be mounted to the underside of your livewell lid, Accu Cull’s weight recorder is one of the two best systems I’ve seen out there.

I don’t say that lightly. 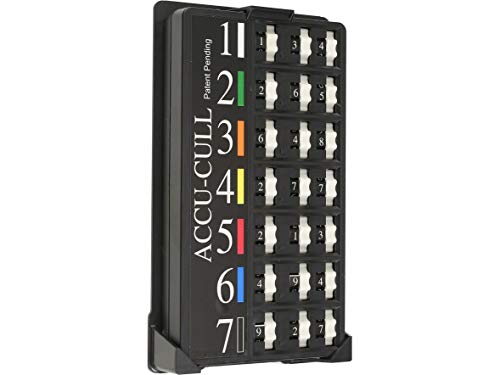 For my money, this is the best recording system out there.

Rather than pencil and paper - or grease pencil and board - marking, you just turn a no-nonsense dial to the appropriate pound and ounce positions. Each of the seven positions is color-coded, allowing you to keep track of your best fish at a glance.

Made of tough ABD plastic, there’s nothing to rust or corrode, and the dials stay reliably in place.

To me, this is a must-have component of a culling system.

Does this work? Undeniably. But does it cost time? Absolutely.

Good marking systems allow you to quickly identify your best fish, minimizing the chance of mistakes when culling in the final step.

I’ve already mentioned the awesome Accu Cull weight recorder, but keep in mind that it has an alternative I’ll discuss in a moment. 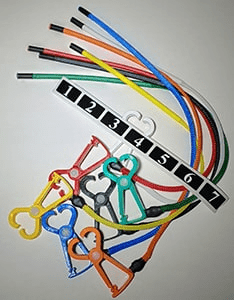 Simple to use, these color-coded tags match the colors of their weight recorder, and the clips hold well without injuring fish.

Fast, at-a-glance information on your best fish - that’s what this Accu Cull marking system delivers when used together with the weight recorder.

But there is a viable alternative to Accu Cull, and that’s the Ardent Smart Cull. 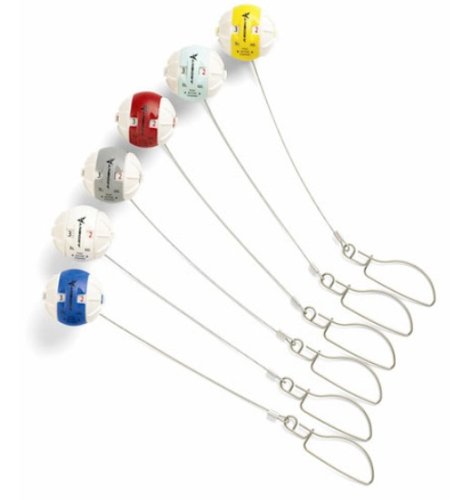 Ardent’s system is ingenious but not as durable as Accu Cull’s.

Ardent has a revolutionary product on their hands, and it really is a massive time saver. They’ve managed to combine marking and recording into a single step by attaching recording devices to the floats.

Each float has dials that record weights in pounds and ounces, making keeping track of your best fish a snap.

The ball floats can be fragile, and there are metal springs inside that can rust.

Does it save time over the Accu Cull?

Maybe - perhaps a second or two. I’m just not sure that’s worth the reduction in durability.

That said, Ardent’s system has plenty of die-hard fans, and I can see why.

So you’ve got your best fish assessed, recorded, and marked when you catch another keeper.

If you’ve got a quality culling system in place, you already have a massive advantage over anglers who don’t, and again, this is a moment when relying on digital scales over rulers will pay off.

Now, there are folks out there who will suggest that you skip straight to the culling beam at this point.

The logic is simple: balance the smallest of your best against the new catch. Keep the bigger of the two.

On the surface, that makes a lot of sense.

The issue is that when you’ve got a few fish that are clearly keepers, and you haven’t weighed each one or recorded that number, figuring out which is the “smallest” isn’t going to be an instantaneous process.

Rigging a few fish on a culling beam to figure this out is a massive waste of time!

But if you assessed, recorded, and marked each keeper with a solid system, the best way to proceed is to weigh your new fish, check the lowest weight on your system, and cull away.

And here, I think the Accu Cull Weight Recorder really pays off.

Each weight is immediately readable, and there’s no need to search for each ball weight and remember the numbers. It’s just faster and more fool-proof.

So are culling beams obsolete now that we have good electronic scales?

A good scale is accurate to something like ¼ oz. in real life - on a pitch boat with angry bass and less than steady hands.

I can see using a culling beam when you’ve got bass that your scale can’t tell apart, but don’t forget that the same factors that affect a scale can mess with your beam.

I’d also caution you that using a culling beam too often on close fish is mostly a waste of time, but I know that’s an opinion that’ll make some people awfully angry.

So if you run a ruler, you’ll need a beam, and plenty of anglers who own a good digital scale still want one.

My favorites include the Ego Culling Beam, Cal Coast’s Fishing Money Beam, and Lew’s Speed Beam. They all work well, but Lew’s comes with clips and is faster to use, saving valuable time. 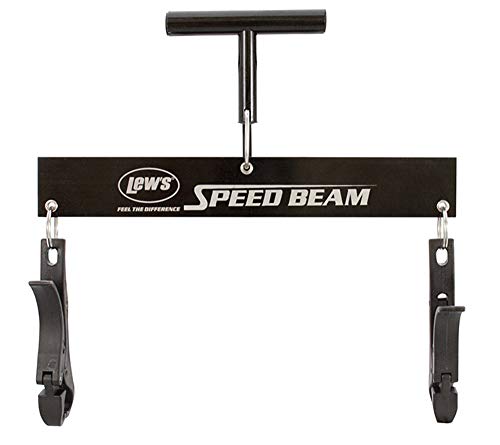 Those clips save time - and time is money in a tournament!

A culling system isn’t as sexy as a powerful outboard, but it’s just as important to winning a tournament.

We hope that this article has helped you find the right system or your style of fishing, and if it has, we’d love to hear from you.