Choosing your fishing line color can be complicated, and it’s important to understand that the “best” color depends on your situation and needs.
For instance, if you’re fishing for crappie and really need to keep track of multiple rods and detect every light strike, a bright yellow, high-visibility line might be the best choice. But if you’re working a worm for largemouth in ultra-clear water, then clear fluorocarbon might be the right pick.

There’s no one “best” color of fishing line, but there are some easy-to-understand guidelines that can help you make the optimal choice.

Line Color Basics: To See or Not To See

At the most basic level, line color allows for two opposite possibilities:

Let’s take a closer look at these options.

In situations in which line visibility is a good thing - and these are pretty rare with just a few exceptions like spider rigging - you want to choose a highly visible line color, typically bright yellow. 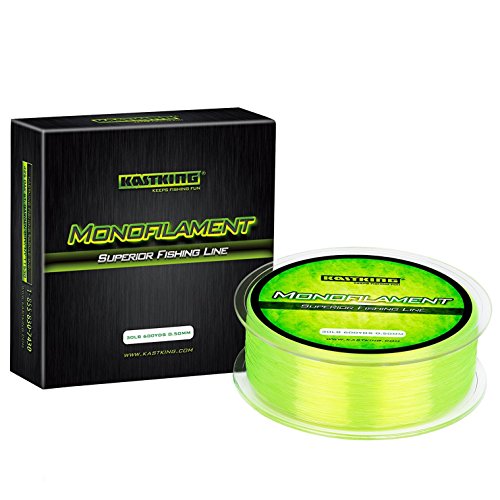 Many manufacturers produce high-visibility line for crappie fishing, with KastKing to Lews being our favorites. These bright, nearly-fluorescent hues of yellow allow you to see every bump, nudge, and bite of your jig, making soft-striking crappie easier to catch.

It’s especially useful for techniques like spider rigging, where you’ll be watching lots of rods at the same time.

Low-visibility line choice: more complicated than you might think

For pretty much every other situation an angler faces, most fishermen agree that low-visibility line is better.

There’s little question that fish like largemouth, pike, or tuna can see color; scientists have established that they can, and we even know for some species which colors are most visible to them.

For instance, biologists know that trout “see the reds, greens and blues seen by humans but with some differences - what an angler sees as a dark red lure is perceived as bright red by the trout. But with the fourth set of color receptors, trout can sometimes detect ultra-violet frequencies as low as 355 nanometers, below the spectrum visible to humans.”

And while the exact spectrum a fish can see varies by species, it’s a safe bet that whatever you’re fishing for can perceive color.

But don’t forget that depending on the lighting and relative position of the line and fish, silhouetting against the sky or bottom can create enough contrast that even the clearest of lines is visible.

What no one is really sure about is whether fish are afraid of line, what anglers often call line-shyness.

Many, maybe even most, anglers are concerned enough by this possibility that line manufacturers have gone all-in on invisibility.

And while there’s plenty of debate about whether fish are in fact line shy, especially among braided superline fans and anglers who use easy-to-see leaders, if we look to line sales and manufacturer’s choices, we’d have a hard time explaining the continuing popularity of fluorocarbon if anglers weren’t concerned about line-shy fish.

Now, fluoro has some strong suits that might make it a better choice than braid or mono in some situations, but as we’ve discussed before, the real selling point of fluorocarbon is its low refractive index, meaning that it refracts light very much like water does (but not identically).

Hypothetically, that makes it very hard for fish to detect, and if you ask pretty much every angler who runs it, that’ll be the first thing they mention, pretty much guaranteed.

Water is pretty good at absorbing light, and if you’ve ever watched documentaries about the deep sea, you know that eventually, all light is blocked, resulting in endless night.

In shallower water, not all light is lost, but color perception is affected.

As light penetrates the water column, higher frequencies are absorbed first, slowly moving down the spectrum to lower frequencies. That means that red, orange, and yellow are the first colors to fade to black, followed by the greens and blues.

Pay attention to that highlighted bit: colors don’t “disappear” - they fade to black or gray.

This chart represents color fading at depth. Note that red starts fading to gray or black at about 10 feet.

This, of course, assumes that the water is clear.

In murky, stained, silty, or muddy water, everything is less visible generally, and even perceptible colors will take on more muted hues.

This is probably the most important point to understand about low-visibility options: you’re looking for line colors that blend with the background.

Keeping in mind that colors fade to black as you go deeper, in clear water, blues, light greens, and clear are probably the best choice.

If you’re fishing for wahoo or black drum in the Florida Keys, and you can see the bottom in 20 feet of water, you’re going to want a line that matches the general hue of the water, blending as much as possible into the background.

Red line will indeed fade to gray at 20 feet, but gray may stand out like a pink flamingo on a suburban lawn against white sand, green vegetation, and a bright sky.

But if you’re fishing a muddy lake in Alabama, surrounded by red clay hills, red might be just the right color to render your line nearly invisible. With all that suspended clay in the water, red line will be lost against the background, matching the color shift to gray at depth.

As you can see, line color choice seems pretty complicated, and it’s true that a lot depends on the specific water conditions you encounter.

But one rule simplifies this mess and gets you on the right path: minimize contrast.

What that means is that you should always match your line color to the water color. In clear water, pick clear or blue; in stained or muddy water, pick the line color that best matches the water.

For most situations, there are some tried and true options available. Let’s break them down in detail.

Clear and blue monofilament are trying to blend into the background of clear water, and both are well equipped to do that.

Clear or blue mono is a great choice in places like the Keys.

While fishing the rocky coast of Croatia, I’ve had to retrieve stuck jigs and spoons in crystal clear water down to about 30 feet. Even with a mask, I can tell you that unless you’ve got the line in your hand, you won’t find it by eye.

It’s that hard to see. 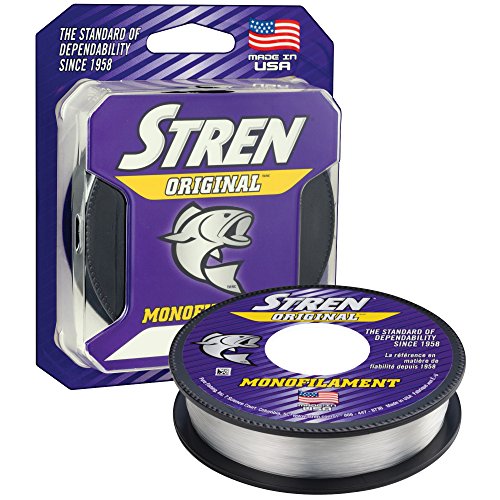 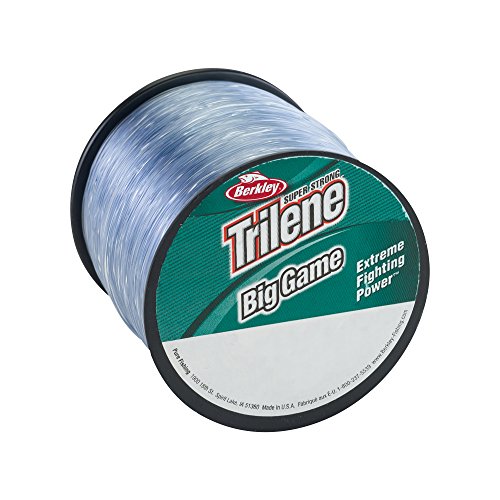 For lakes and rivers that are murky and muddy, and for inshore fishing where sediment, mud, or soil has turned the water green or brown, line choices that match these backgrounds can be awesome.

Green braid is nearly always a good option on a bass lake.

General visibility tends to be pretty low in these kinds of conditions, and greens and browns won’t fade to grays and blacks any faster than the water behind them.

That renders your line nearly invisible.

Especially for braid, which can’t be produced in clear, green and brown are the go-to color choices in many hot spots because they blend so well into the water. 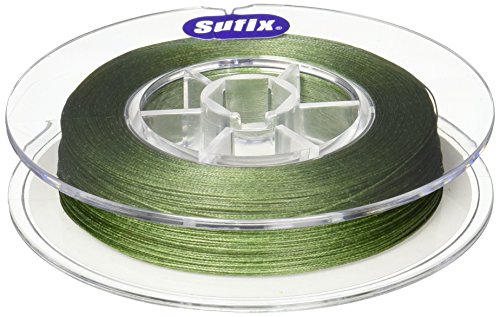 It’s easy to see why “Coastal Brown” was created.

For monofilament, Trilene Big Game in “Coastal Brown” or “Green” is a great choice, as is Stren Original in “Lo-Vis Green.”

Red is an usual choice unless you’re from the Deep South.

Because of the high clay content in the soil in many areas, the water will take on a muddy red color that allows red line to positively disappear.

I’m not a fan of red in other circumstances, but where this color matches the background, it’s deadly.

Zebco’s Cajun is probably the most popular choice for this application, and plenty of anglers swear by it even where the water isn’t stained red by clay.

Fluorocarbon is a monofilament line, like nylon, but with a refractive index closer to water: 1.42.

What is certain is that fluorocarbon is at least as invisible as clear mono, and perhaps even a bit better.

For clear-water applications, that makes fluorocarbon a great choice.

Seaguar Invisx is among our favorites fluorocarbon lines, and it’s a proven performer on the water. 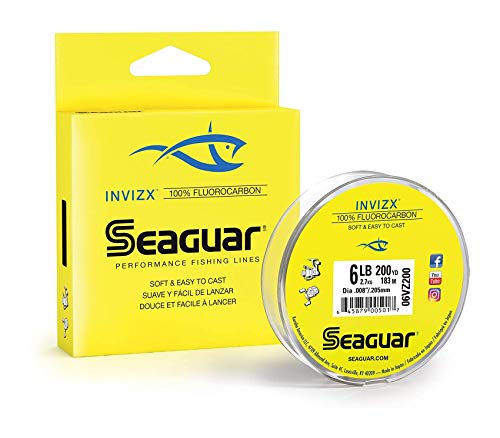 There’s clearly no one color that’s best for every situation, and depending on your circumstances and needs, everything from bright yellow to dark green can be the right pick.

But we hope that we’ve helped you get a better grip on why and how line color matters, assisting you in making the best choice for your needs and circumstances.

As always, we’d love to hear your questions and comments, so please leave a message below.