No fish gets American anglers as excited as largemouth bass, and from small ponds to the Great Lakes, we’re lucky to have prime fishing in nearly every state.

But among the good spots to fish, there are some real stand-outs, and if you know where to look, you can find fisheries that regularly produce trophy bass.

Does that have your heart beating a little faster? Keep reading!

Below, you’ll find information on 13 of the best bass fishing locations in the country and a few insider tips to get you in on the action. 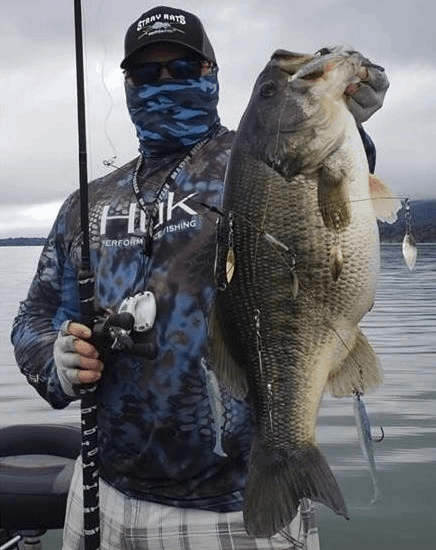 As bass anglers across America know, California is the King of the West, and it just might be the best place for bass fishing in the country right now!

Its Clear Lake covers 68 square miles, providing unbeatable habitat for largemouth bass as well as a climate that induces fast growth rates and high replacement. The result is a fishery that has dominated the competition over the last decade.

The current record for Clear Lake stands at 17.52 pounds, and you can thank thoughtful stocking for numbers like that. According to the Lake County Record-Bee, “The largemouth bass in Clear Lake are all either Florida-strain or a mix of Florida and northern strains… Florida-strain bass live longer and grow larger than the northern largemouth. Florida-strain bass were stocked in Clear Lake in 1969 when the Department of Fish and Game stocked the lake with 139 of the fish. That was followed by another stocking of 242 fish in 1970 and 58 more in 1971.”

These favorable genetics, careful management, and excellent habitat combine to create a paradise for bass anglers. 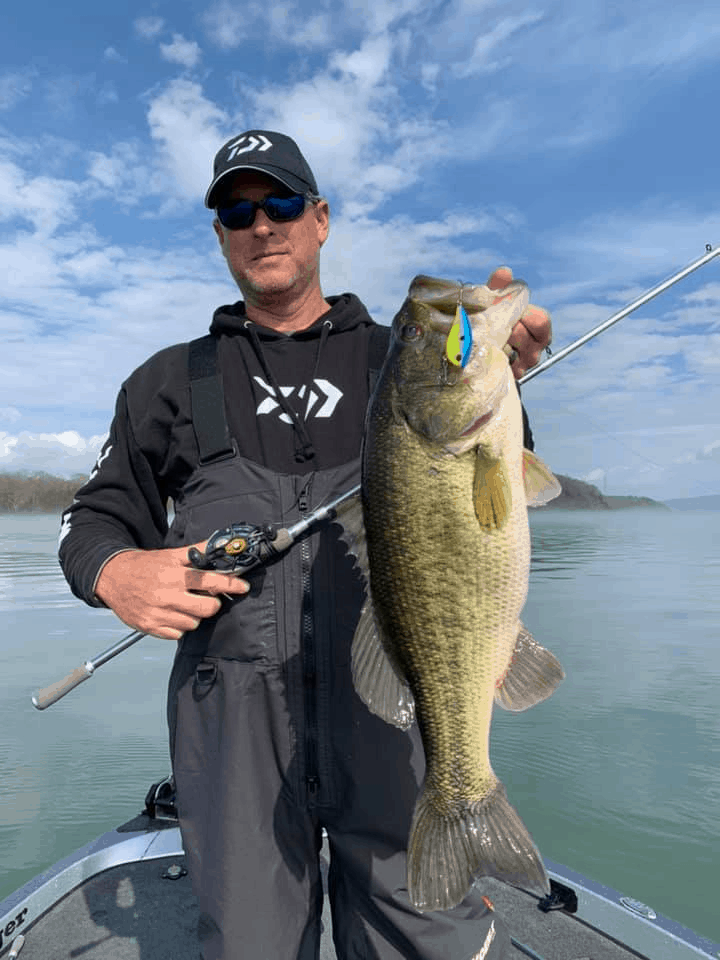 With 69,100 acres of water created by a dam on the Tennessee River, Lake Guntersville is a destination bass anglers hold dear in their hearts. Home to 2021’s Berkley Bassmaster Elite, it offers tournament-grade fishing at its finest.

Aquatic vegetation thrives on Lake Guntersville, creating habitat for prey and ambush locations for hungry bass. The bottom is covered in stumps - the remnants of the forest that was flooded to create this lake - and as any serious fisherman knows, that’s just the right recipe for big bass.

But as you can imagine, fishing pressure can be intense, especially pre-spawn, so it’s often best to hit the water on a weekday. 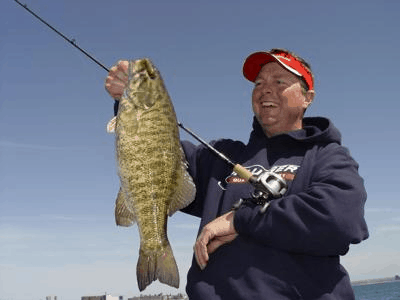 As local fighting guide Capt. Kevin Swartz reveals, “When local clubs hold largemouth tournaments out of the Port Clinton area, some of these guys will come in with 20-pound limits (5 fish).” That’s an impressive total, to be sure, and relatively low pressure ensures that 3-, 4-, 5- and even 6-pound bass are relatively common.

Massive specimens are rare, but consistent size and unwary attitudes combine to make Lake Erie a much better bass fishery than you’d expect. 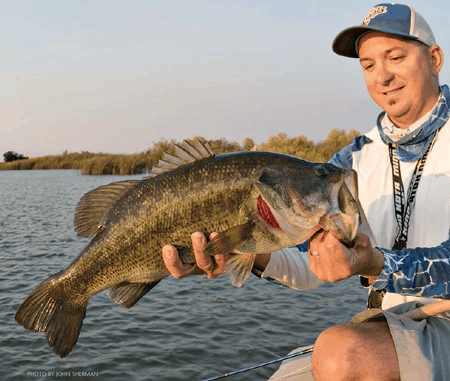 Northern California is home to this sprawling inland estuary that empties into San Francisco Bay.

A labyrinthine network of branching waterways, grasses, and docks abound on the edges, creating ideal habitat for largemouth bass and their prey. And while this maze-like network may take some getting used to - and serious navigation aids - it’s very hard to beat as a bass fishery.

Cranks and worms are excellent options to work vegetation, and a good chatterbait can work wonders pitched under a dock here.

And the shallow water of the Delta means early spawning and consistently large, healthy bass. They won’t be shy - so don’t be afraid to work aggressively! 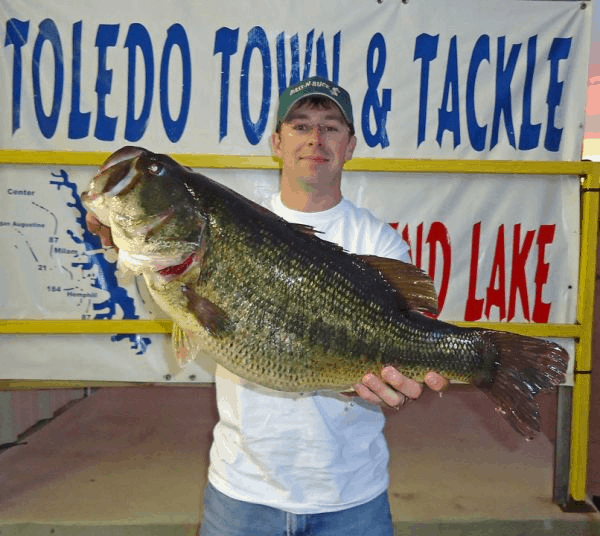 Toledo Bend has been a bass hotspot for as long as I can remember, and its 181,600 acres hold a shocking number of big bass despite heavy pressure.

And because the weather is warm - downright hot, actually - for most of the year, growth rates and replacement are exceptional. That scorching climate also allows for a ridiculously drawn-out spawn, and as the pros know, that matters.

That one reason Bassmaster Elite pro Greg Hackney ranks Toledo Bend as one of his favorites: “I think one of the biggest reasons I’d rank it highly is not necessarily because it’s that much better than any good lake during the spawn — but the spawn last so long there because there’s so many fish … [it’s that] … There are fish spawning there in February through May.”

Indian Creek, Housen Bay, Negreet Creek, 1215: these are magical locations on Toledo Bend pre-spawn, but nearly any cove, creek ingress, or point can hold a monster. 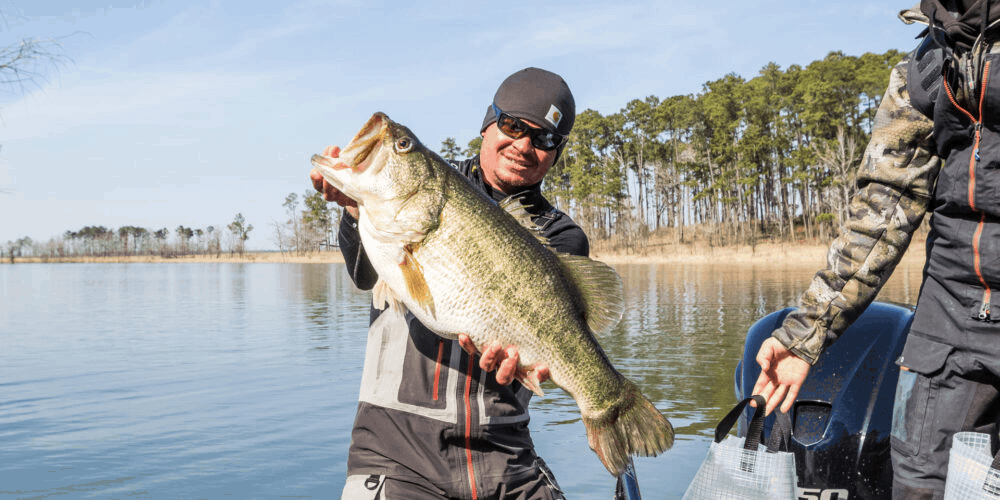 Sam Rayburn’s 114,500 acres are fed by the Angelina River, producing one of the country’s best bass fisheries, year-round.

Though you may not feel this way in the sun, the Reservoir is blessed by a hot climate that keeps water temperatures near ideal for bass growth and replacement, and careful management has further enhanced this natural effect.

Add to that a forest of pre-impoundment timber and plenty of hydrilla and other aquatic vegetation, and you’ve got a potent combo of ideal weather and habitat that produces amazing bass, year after year.

That’s a fact not lost on anglers throughout the region, and the spawn sees areas like Harvey Creek, Buck Bay, and Deer Stand packed with boats and anglers, so expect heavy pressure on weekends.

Chatterbaits, jerk baits, frogs, and big Zara Spooks are popular on Sam Rayburn for a reason. 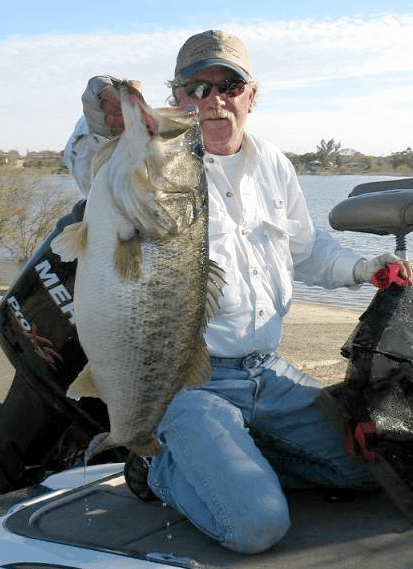 Falcon Lake’s 83,654 acres can recede quite a bit when water is scarce, and when the lake takes back what it surrendered to drought, it submerges acre upon acre of mesquite, creating unrivaled habitat for big bass.

That’s not to say that Falcon isn’t a great fishery year after year - it is - but rather that it offers something special when it submerges its shoreline in periods flush with water.

And its southerly location, bordering Mexico along the Rio Grande, means that mild winters and warm springs and falls keep the bass growing.

For many anglers, Falcon lake is THE place to be for a personal best.

What do I mean?

Consider that to win a tournament on Falcon, you’ll need a 5-fish total in the neighborhood of 35 to 40 pounds!

Soft plastics are king here, so be sure to bring plenty of them. 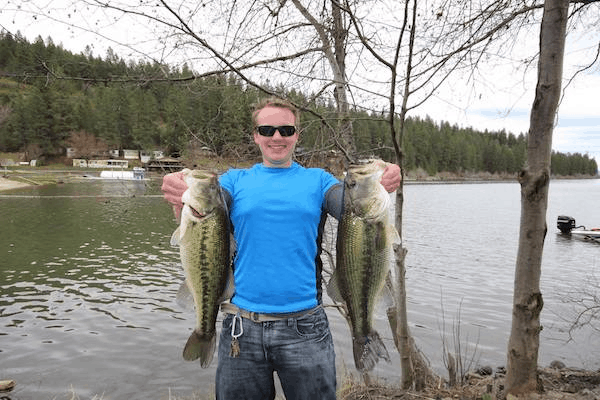 The northern side of Coeur d'Alene features deep, rocky, clear water, but the southern end offers plenty of shallow vegetation and backwater lakes. That’s the place to be pre-spawn, and the fishing is excellent with relatively low pressure for largemouth.

As you’d expect for Idaho, spring is a long time coming, and the spawn doesn’t get moving until late April or early May. Water temperature is critical, so use your electronics to find the hot spots (literally) and fish the highest temps you can find.

Adolescent kokanee are a major food source for largemouth in Lake Coeur d'Alene. Choose your lures to match that hatch and you’ll have a good chance at a bass pushing 5 pounds or more. 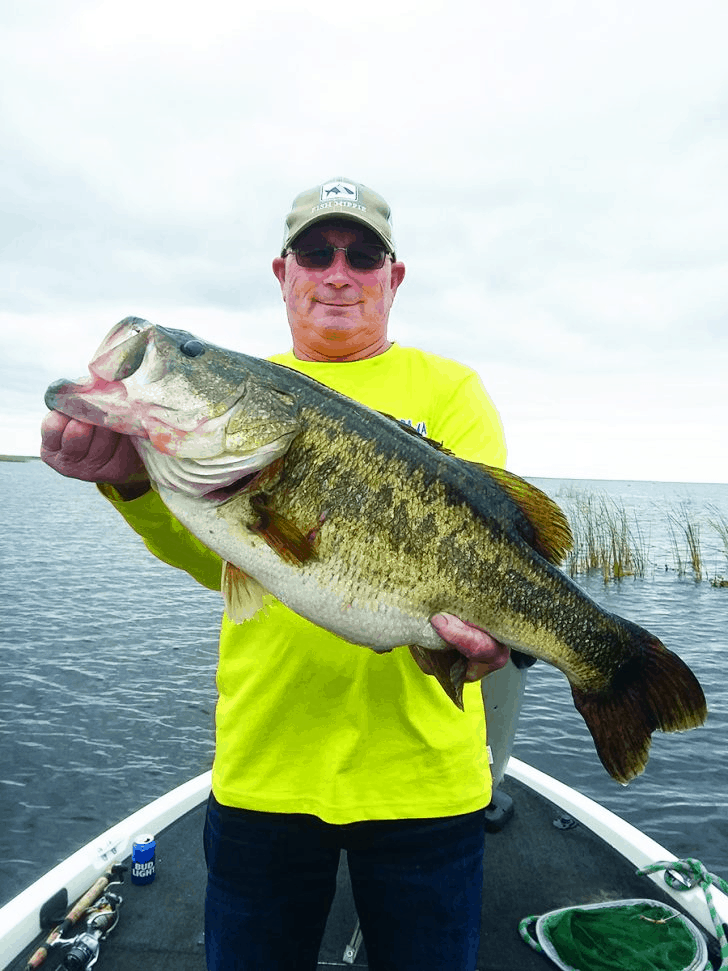 Lake Okeechobee’s 730 square miles of water can be a daunting challenge to the uninitiated, as the sheer size of this lake can leave new anglers guessing as to where to begin. And from shallow, reed-choked water to islands, this fishery offers it all.

But locals know a secret - water clarity is the key to finding big bass. Scott Martin, a local guide, insists that “You need to be able to see down at least a foot or two.” Where you can, the bass will be feeding; where you can’t, don’t expect much.

Wildlife biologists note that bass numbers - and size - are directly correlated with the health of submerged aquatic vegetation. Hurricane Irma devastated Okeechobee in 2017, destroying many prime spots for bass feeding.

And as the grasses and other plants have had time to recover, so, too, have the bass. 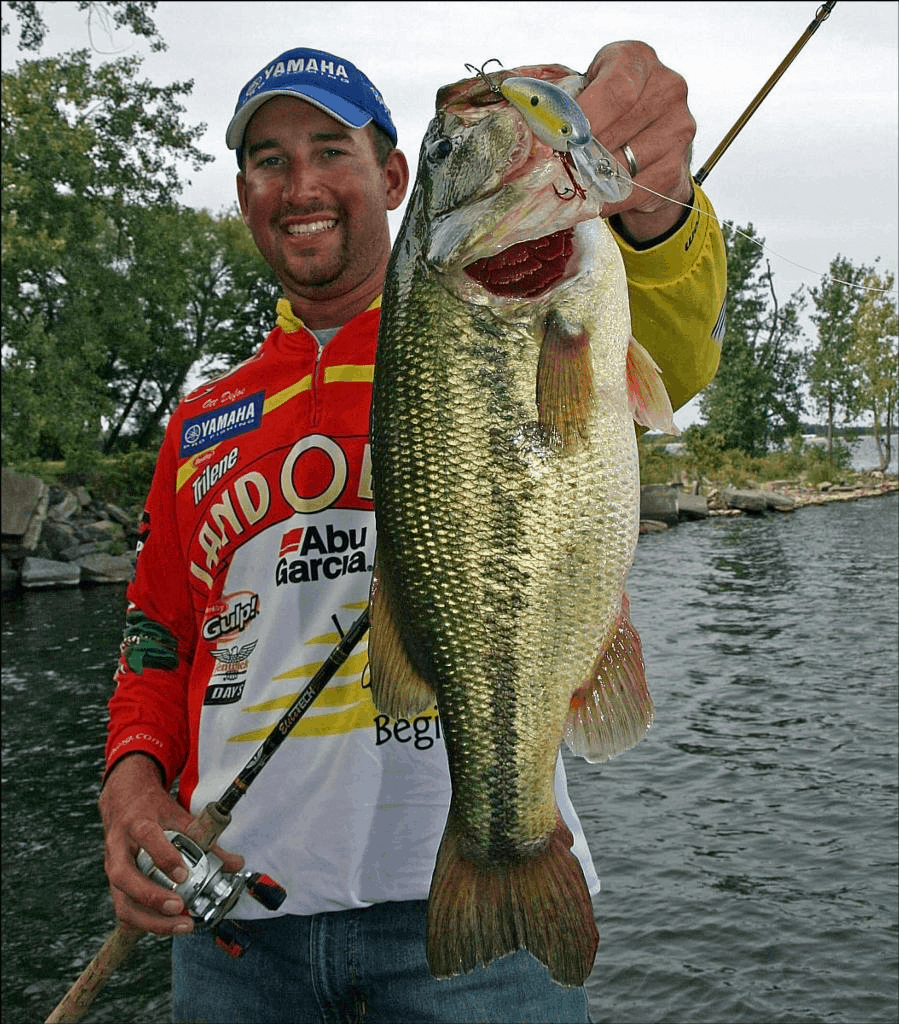 Lake Champlain is big, offering 514 square miles of surface, and it offers a diverse topography that includes shallows, truly deep water, islands, coves, and pretty much everything else!

For beginners, big water can be disheartening, as there’s simply so much of it that they don’t know where to start looking for bass.

A pro tip: on the Ticonderoga side of Champlain, look for the milfoil-rich shallows, and you’ll find largemouth. The deep sides of the lake, bordered by mountains in many cases, are simply too deep, too fast for bass. And while the north end can offer decent opportunities, my money’s still on the “Ti” side, as locals refer to it.

In April and May, when the water creeps over spawning temperature, it’s almost a sure thing to find a patch of rock or some other heat sink and work that locally warm water for actively feeding fish.

The only river draining the Great Lakes, the St. Lawrence is simply massive, averaging more than two miles in width and running plenty deep in stretches. That means that the water isn’t warmed quickly in spring, and it’s probably best to treat the St. Lawrence more like a lake than anything else.

Watch the water temp carefully, and expect the spawn to begin in mid-April.

And though smallmouth are the prime draw, the river holds plenty of mature largemouth, too, especially around the Thousand Islands.

Lake of the Isles is a common destination for bass anglers, but any shallow that sports plenty of aquatic vegetation is a good spot. Keep in mind that these shallows will heat up much more quickly than the main channel, so a few scouting trips in early April may pay off. 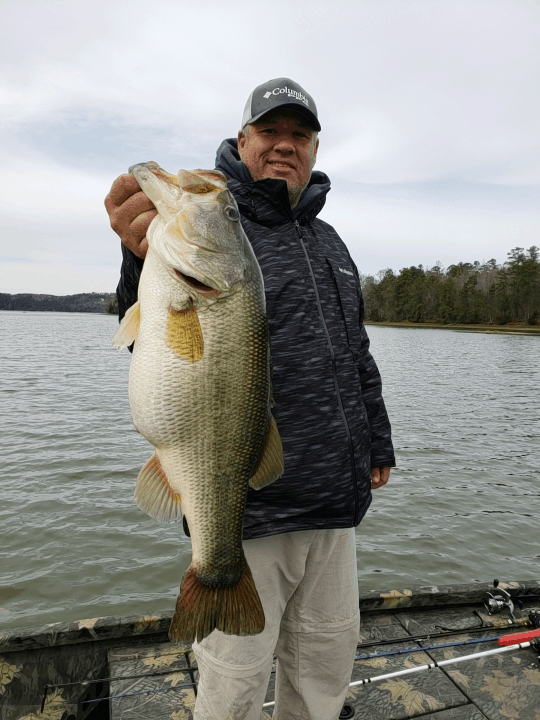 Pickwick Dam creates the 43,100 acre fishing mecca shared by three states, and warming spring weather pulls anglers to the water like a magnet. Weekdays may be more productive in the spring when fishing pressure is at its highest.

Brandon Lester, a Bassmaster Elite Series pro, recommends that you “Look for hydrilla in the creeks, where prespawn largemouth will stage and spawn, while feeding on the young baitfish at the same time.”

Finding those weedy ingress points will put you on some hot fishing, as they’re pretty much an underwater buffet for hungry bass.

Pickwick is blessed with ideal bass growth and replacement conditions. Indeed, an excellent climate and near-perfect habitat ensure season after season of big bass: the top 20 of the 2021 Alabama Bass Trail on Pickwick each had a 5-fish total breaking the 20-pound mark!