Most of the bass anglers I fish with know more about color palettes than interior designers, and I’m pretty confident that if you’re reading this, you can immediately summon to mind colors like “chartreuse,” “pumpkin seed,” and “junebug.”

That’s because we all know how important sight is to bass, and we choose our worms and lures with this in mind.

But when it comes to sound, we’re all far less refined in our assessments. “Loud” is about it when it comes to the blades on everything from chatterbaits to spinners, and though the real cognoscenti and tournament pros can tell you a thing or two about the difference between a Colorado and a willow blade, most of the marketing hype would have you believe that more sound is better.

And to really understand when sound is your ally - and which sounds are likely to encourage a strike - we need to get into the details on the largemouth bass’s sense of hearing.

So keep reading if you’d like to catch more fish!

If there was one thing I heard as a young angler, it was that loud noises could spook cautious fish.

That’s about as close to an absolute truth as you’ll ever hear.

Two things account for this. First, water transmits sound really, really well (though there are some counterintuitive phenomena to consider). And second, bass possess a very sensitive sense of hearing.

Let’s take a close look at how that works.

Sound waves require a medium to propagate, which is just a fancy way to say that in a vacuum, sound simply can’t happen. In the air, sound is transmitted by the elementary particles of oxygen, hydrogen, carbon dioxide, and rare gasses, plus the other stuff like dust and water vapor.

When you cough, for instance, the air in your lungs is forcibly expelled, starting a shock wave through the air that causes these particles to collide. Those collisions are then detected by your ear and its delicate structures and translated into the sound you hear.

Starting your trolling motor underwater does much the same thing. As the blades spin up, they push water violently, causing the water molecules to collide and disperse in waves. But because water is 800 times more dense than air, there are a lot more of these elementary particles, a lot closer together, allowing those collisions to happen more rapidly and with many more participant parts.

Water, due to its vastly greater density than air, transmits sounds faster and farther than air.

But there’s a strange caveat to that.

The air/water boundary is pretty good at reflecting sound, trapping those waves on the side from which they originate.

All other things being equal, sounds generated below the water line are much more noticeable than sounds created in the air above.

Largemouth hear with their ears, not just their lateral line

Bass have three organs that detect sound and vibration.

The first is their lateral line, the long organ that detects vibrations in the water. The second is their swim bladder, the air-filled sack that vibrates when sound waves strike their body. The third, and the focus of our attention here, is their ears.

Unlike you and me, bass don’t have any external ear parts, just internal organs that detect sound waves. These inner ears, however, work pretty much just like ours, picking up the collisions of water molecules in a sound wave and working with the bass’s nervous system and brain to translate those impacts as sound.

But bass don’t have the same spectrum of frequency perceptions as humans do.

The largemouth’s inner ear isn’t tuned to high-frequency sound but instead perceives the low end pretty well, allowing it to detect the low-frequency sounds that prey items tend to give off underwater.

That makes them sensitive to tiny noises like the clicking of invertebrates, the tail swoosh of shad, or the splash of a frog hitting the water. And since this sense is tuned to the bass range (no pun intended), it’s fairly long distance - unlike the lateral line, which is a close-range vibration detector.

What’s important to understand about this is that the bass uses its hearing as a feed or flee mechanism.

The bass’s sense of hearing is there as an “early-warning” mechanism. Able to detect noises at least as far as it can see in crystal-clear water, its sense of sound alerts it to potential prey and potential predators.

Feed or Flight? That’s What Sounds Mean to a Largemouth Bass

That makes sound a double-edged sword.

The right sounds can attract a bass’s attention, get it to focus its eyes on your lure, and make it start thinking about a strike.

The wrong sounds will shut out any feeding response and get that bass moving away at top speed.

While you can fall asleep to the droning sounds of waves, and even constant background traffic or wind howling may not cause you trouble, sudden loud noises can wake you from even a deep sleep.

That’s your brain warning you of potential danger. Constant background noise rarely signals a threat, but a sudden growl, a breaking stick, a loud bang: these are things to look out for.

For largemouth bass, it’s pretty much the same.

They’re used to the constant drum on waves on stumps, pilings, or the shore. They’re even OK with the constant background whine of outboards and trolling motors. But sudden, loud noises send them into flight mode.

Everything from banging shut the lid of a live well, to slapping the gunnel with a rod, to starting and stopping your trolling motor will spook wary bass. These sounds stand out against the background, and whether they’re transmitted directly in the water or through the medium of the boat to the water, bass sense danger when they hear them.

By contrast, talking won’t bother them as much, nor will a cough or other airborne noise.

Other kinds of sounds literally ring the dinner bell.

The quiet, almost imperceptible clicks of fat crawfish, the flutter of a shad’s tail, and the erratic bumping of an injured minnow against vegetation: these noises focus a bass’s attention, tell it to take a closer look, and prepare it for a strike.

Notice some things they share in common: they’re all relatively quiet, and they’re not constant.

Now that doesn’t mean that a chatterbait thumping for all its worth isn’t going to work, but rather that you need to think about two things when selecting a lure for bass.

The first is water clarity.

The lower the visibility, the more noise you want your lure to make - provided it’s the right kind of noise, of course!

That’s because when a bass can’t see its prey, it relies more on sound than sight, and you’re trying to attract attention over a wide area. Even then, less is often more, and you want to steer toward tried and true designs.

The second is the frequency and duration of the sound. You want sounds that mimic - as much as possible - the noises created by prey items. These are usually pretty quiet, but when the water’s murky, you can increase the sound volume to killer effect.

The legendary Rat-L-Trap built its reputation in just this kind of situation. Between the fluttering wriggle and the pellet chamber, these little lures have just the right kind of sound to attract hungry bass when visibility is low.

Crankbaits with the right kind of action also create noise - not just vibration, per se - that the bass can hear. The best mimic the sounds produced by swimming baitfish like shad and minnows, and among these top picks, experienced anglers count winners like the Rapala Shad Rap.

The Shad Rap has more going for it than color.

Brightly colored spinners like Booyah’s Pond Magic also have what it takes in the sound department when the water’s too dark for good vision, with both the blades and the fluttering skirt making just the right kind of noise to trigger a strike. 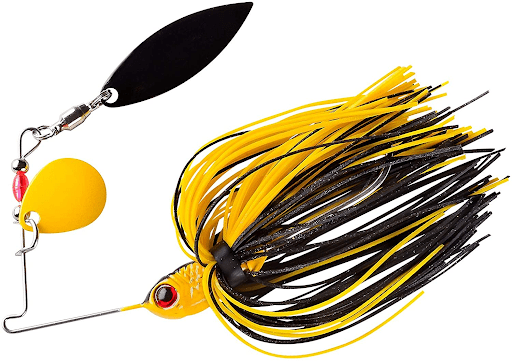 Bright, loud spinners like this Booyah Pond Magic are awesome when the water is dark, stained, or muddy.

That may not sound right to you: “no way is a skirt making noise, right?”

Your ears aren’t designed for capturing sound underwater, and they’re certainly not tuned to the right frequencies to detect the noise a fluttering skirt makes. But then again, you also won’t hear that crawfish in a crevasse a few feet away, either.

And that leads us to a final lure that makes the right kind of sound: soft plastics.

Whether you amp them up with a chatterbait like the Z-Man Original or just run a simple Senko, rest assured, those plastics are making the tiny, quiet sounds that trigger a feeding response in bass.

As hard as it may be to believe, soft plastics make noise bass can hear.

So, as a general rule, when the water’s clear, lower the volume on your lures and let gentle sounds do their thing. But when visibility is poor, make some noise.

The trick, in either case, is to vary the duration of these sounds, starting and stopping to stand out against the constant background clutter.

When you get that sound right, and the cadence dialed in, bass simply can’t resist.